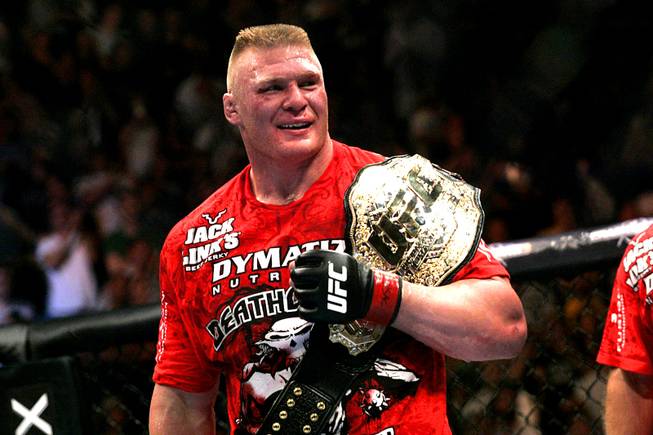 Brock Lesnar, the pro wrestling superstar and former UFC heavyweight champion has turned down the idea of any future comeback to the Octagon. The WWE icon, who broke into the mixed martial arts scene like a meteor and dominated his way to the top, became the UFC heavyweight champion just a year after his debut inside the cage. The reigning WWE champion did make a comeback to the scene in 2016, but since then, there has been no lead on if the MMA fans would ever see Lesnar competing again, and now the fighter himself has shut down the idea of any potential return.

Already an established name in WWE, Brock Lesnar entered the MMA scene in June 2007 against Min-Soo Kim at Dynamite!! USA, followed by his UFC debut at UFC 81 against Frank Mir in February 2008. The same year in November, Lesnar clinched the UFC heavyweight title, defeating Randy Couture at UFC 91.

Following a rematch against Frank Mir as well as another title defense against Shane Carwin, Lesnar lost his title against Cain Velasquez at UFC 121 in October 2010, followed by another defeat against Alistair Overeem at UFC 141 in December 2011. It took him five years to make a comeback against Mark Hunt at UFC 200, a fight which Lesnar won via unanimous decision but was later overturned after testing positive for clomiphene.

The 2016 return had the fans anticipating another comeback from Lesnar in present times, but speaking to The New York Post ahead of his title defense at the Madison Square Garden, Lesnar said that MMA is a young man’s sport and he won’t be coming back to the cage.

“That door is closed,” said Lesnar “You know what, Dana White, the Fertitta brothers [Lorenzo and Frank] were exceptional to me.”

“I’m too old,” the 44-year-old continued, “That’s a young man’s sport, and that door is closed. I’m Brock Lesnar, the WWE Superstar.”