WWE/UFC: Brock Lesnar might still return to the UFC! 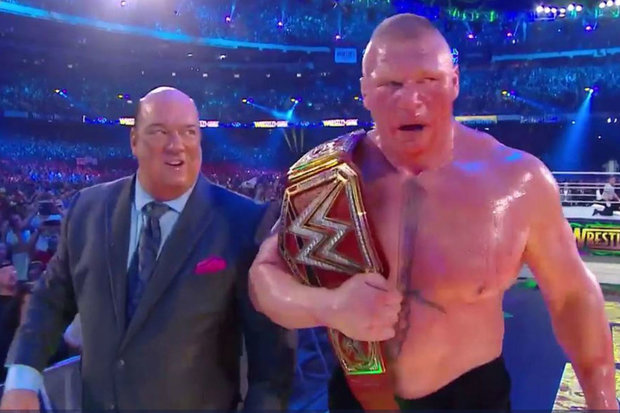 Shock-waves were sent into the entire MMA world when UFC president, Dana White posted a picture with former UFC heavyweight champion, Brock Lesnar. In the recently conducted UFC 25 year anniversary press conference, the UFC President had even further claimed that the fans will certainly see Lesnar back in the octagon potentially fighting the winner of the bout between Stipe Miocic and Daniel Cormier in a title fight. However, all such expectations of Lesnar’s UFC return were hit by a lightning bolt when the WWE announced that Lesnar had signed a new deal with the company. Though, there have been certain media reports that Lesnar will indeed make his octagon return.

Lesnar is currently under contract with the WWE and was all set to defend his title at Wrestlemania 34 against Roman Reigns. Lesnar’s WWE contract was running out and he had been procrastinating about signing a new deal with the promotion.

Almost everyone expected Lesnar to drop the WWE Universal title against Reigns at Wrestlemania. However, in a shocking conclusion, he pinned “The Big Dog” to retain the title. WWE quickly announced the very next day that “The Beast Incarnate” has agreed terms and penned a new contract.

The news broke like wildfire and fans began to question White’s claims on Lesnar’s return. However, according to noted combat sports journalist Dave Meltzer of The Wrestling Observer Newsletter, Lesnar’s new contract has a clause for at least one potential UFC fight. Even the length of Lesnar’s contract was not announced, though certain sources claimed that it is a short term deal.

According to Meltzer, the sources also claimed that there is a clause for at least one UFC fight in Lesnar’s new WWE deal. It is currently unclear whether the deal allows more then 1 fight or not.

Meltzer further added that if Brock wins the UFC heavyweight title against Miocic or Cormier, then Dana White will simply have to negotiate a deal with WWE owner, Vince McMahon to allow Brock to defend the title.

You can read Meltzer’s full new report at MMA Fighting.