UFC: WWE Champion Daniel Bryan to Henry Cejudo: If you fight me, you go down every time! 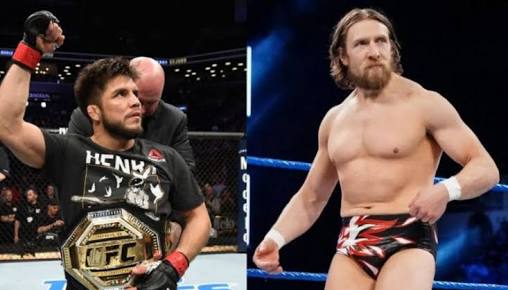 UFC Flyweight champion Henry Cejudo is probably having the time of his life.

Cejudo defeated the former P4P #1 Demetrious Johnson and absolutely starched current bantamweight champion in consecutive fights. However to add up to that, the cherry on the cake was added by Cejudo getting a reply from his all-time crush, WWE superstar Nikki Bella.

Nikki Bella has been famously engaged to John Cena. Cejudo, who was at Cloud 9 after receiving the reply, claimed he would kick Cena’s ass for Nikki as well. However that didn’t go well with Nikki’s brother-in-law, WWE champion Daniel Bryan. 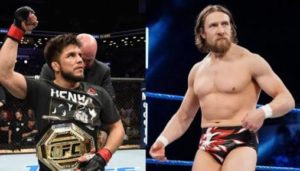 Speaking with ABC Sports on Sunday’s Royal Rumble pay-per-view, Bryan had some words about Cejudo. Bryan challenged Cejudo and claimed Cejudo would ‘go down every time’ if they fight. (via Twitter):

Earlier this week, UFC flyweight champion and AZ resident @HenryCejudo made it known he would like to go on a date with Nikki Bella.

Henry Cejudo, a Valley resident, who just defended his UFC championship last Saturday, wants to go out on a date with my sister-in-law,” the professional wrestler continued. “Guess what? Henry Cejudo, you’re not the man that Daniel Bryan is. You fight Daniel Bryan, you go down every time. That’s why I’m the best.”

Previous articleFedor says he has ‘absolutely no regrets’ not ever fighting in the UFC
Next articleBellator 214 results: Ryan Bader, Jack Swagger win as Fedor and Aaron Pico are brutally KO’ed
- Advertisement -