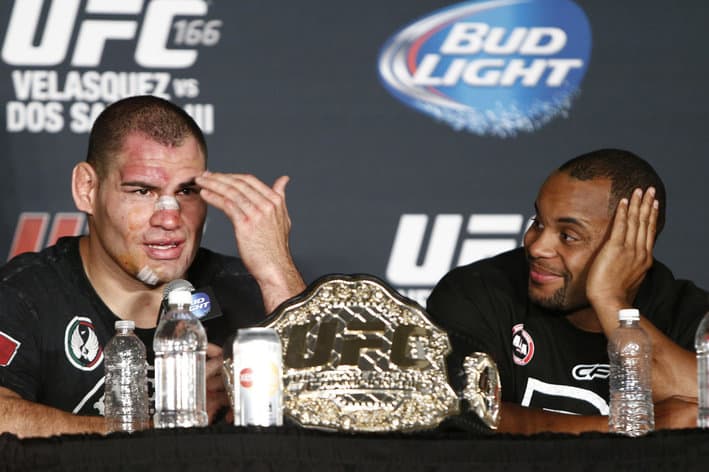 It’s been more than two years ever since Cain Velasquez fought in the UFC and it doesn’t look like he will be fighting anytime soon. Cain has been out of the cage for long as a result of injuries.

According to his longtime coach Javier Mendez, the former UFC heavyweight champion could be moving on very soon.  It’s a tremendous injustice to his fans who have been waiting for his ring return and wanted to see the talented heavyweight back in action. 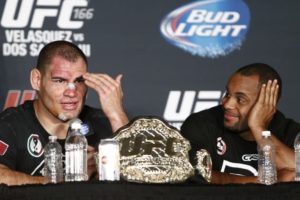 Velasquez last fight came at UFC 200 in July 2016 when he TKO’d Travis Browne in just under one round.

“THERE’S CONTRACT NEGOTIATIONS GOING ON THAT I’M NOT PRIVILEGED TO KNOW. BUT I DO KNOW THAT OTHER ORGANIZATIONS ARE INTERESTED IN BUYING CAIN [VELASQUEZ’S] CONTRACT. IT’S FOR SALE, I DO KNOW THAT BECAUSE I WAS TOLD THAT FROM SOMEBODY THAT’S IN THE KNOW. THAT THEY WERE OFFERED MONEY TO BUY CAIN’S CONTRACT BUT WHAT’S GOING ON, I DON’T KNOW.

I DON’T KNOW [IF THEY’RE OTHER MMA ORGANIZATIONS OR WWE]. I JUST KNOW THAT CAIN WENT [TO THE WWE PERFORMANCE INSTITUTE RECENTLY] BECAUSE HE LOVES WWE. THAT’S THE ONLY PURPOSE I KNOW OF.

IT HAS NOTHING TO DO WITH DANIEL [CORMIER].”

Cain’s longtime friend and his teammate Daniel Cormier is the current heavyweight champion and is defending his title against Derrick Lewis at the Madison Square Garden in New York.

Previous articleDespite TJ Dillashaw moving down a weight class, UFC 233 could host the last ever Flyweight fight
Next articleBellator’s Heather Hardy won’t step inside the boxing ring unless it’s for a world title