Can the Featherweight Division Emerge from the Shadow of Conor McGregor? 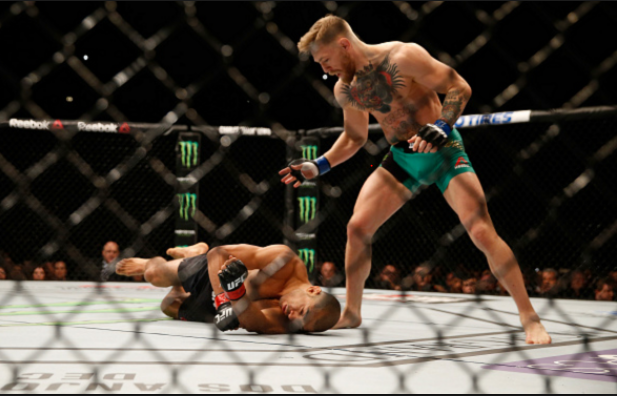 UFC Featherweight champion Jose Aldo will collide with the Interim champion Max Holloway at UFC 212 this Saturday in Rio de Janeiro, Brazil. For hardcore fans, this is one of the most highly anticipated fights of this year. The narrative is about a dominant champion going up against a young gun who is on a 10-fight win-streak. At least that’s what the UFC is telling us. There is very little doubt that Jose Aldo is the greatest featherweight of all time and that Max Holloway is the second best fighter in the division. This fight is supposed to tell us who really is the best featherweight in the world. But is it, really? There is a big shadow that looms over this fight, and that shadow belongs to man named Conor McGregor.

Conor McGregor took the featherweight division and the rest of the MMA world by storm starting in 2013 with his exuberance, trash-talk and his overall personality aided by his string of knockout victories. All that culminated in an inevitable showdown with the champion Jose Aldo in December, 2105, who had last lost more than a decade ago and was the only featherweight champion that the UFC had ever known. What happened next was shocking to even the most ardent supports of ‘The Notorious’ one. Conor McGregor knocked out the longtime champion in just 13 seconds, earning the fastest finish in a UFC title fight and the featherweight championship of the world.

Upon his win over the featherweight GOAT, Conor left the division in search of another title, to fulfill his prophecy to become the first simultaneous two division world champion in UFC history. After an injury to then lightweight champ Rafael Dos Anjos, McGregor engaged in an acclaimed duology with Nate Diaz. He then knocked out Eddie Alvarez to win the Lightweight title and fulfilled his prophecy. McGregor has not fought since and no one in the MMA world believes that he would ever go back to featherweight.

In McGregor’s absence from the division, UFC created an interim title which Jose won after beating Frankie Edgar at UFC 200. Upon his second world title win, Conor was stripped of the featherweight title and Jose was awarded the undisputed championship. This raised serious questions regarding the credibility of the title and the champion himself. While Jose is the best featherweight ever, Conor’s title was given to a man he beat in 13 seconds. Conor not only beat Jose, he beat him convincingly. Jose Aldo essentially became the champion without beating the real champion, and they say ‘to be the man, you have to beat the man’. Not that Jose doesn’t want to beat the man. He just thinks, probably rightly so, that the fight will never happen:

“Everybody still asks me if I want or if I don’t want (to fight him again). That’s not up to me. That’s up to the UFC, and we know it will never happen. I don’t even know if he will come back to fight. The UFC tried to do a (second) fight and he didn’t want it, didn’t accept it, because what happened will never happen again.”

All this between McGregor and the champion and then there’s the challenger, or should I say the ‘interim champion’. The reasons as to why Max Holloway was given an interim title opportunity while Aldo himself was the interim champion were clearly financial. After losing the main event of Daniel Cormier vs Anthony Johnson, the UFC needed a title fight to headline UFC 206. Consequently, McGregor was stripped of his title, Jose was made the undisputed champion and Max Holloway vs Anthony Pettis was made an interim title fight. Max Holloway at the time was riding a 9-fight win-streak and was the clear number one contender in the division. But who did Holloway last lose to? Yeah, you guessed it right: Conor McGregor. Conor McGregor defeated Holloway handily by decision in his second UFC fight. While Holloway was way younger and is clearly not the fighter that he was back then, the fact remains: both the participants of this fight have lost to Conor McGregor. This is the reason why the featherweight division is struggling to emerge out of the shadows of this man.

It is nobody’s fault that there is a big asterisk on the featherweight title besides maybe Conor McGregor. The brash Irish fighter did not defend his title for the whole year that he held it. UFC needed a champion in the division to clear a logjam of contenders and Aldo and Holloway are clearly two of the top three featherweights (Frankie Edgar being the third). It was inevitable that one of these three guys would end up being the champion in Conor’s absence. Out of Aldo and Holloway, Holloway at least has the excuse of being quite early into his MMA career when he lost to Conor. Aldo lost to Conor in the middle of his prime and doesn’t feel like the real champion of the division. Daniel Cormier has long been called the paper champion in absence of Jon Jones only because he never beat the man.

If Max ‘Blessed’ Holloway ends up with the title on Saturday, the featherweight division can start to come out of the shadows of Conor McGregor. Even if that happens, some will still call Conor the uncrowned champion of the division and they wouldn’t be entirely wrong.