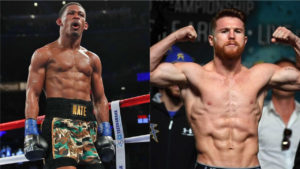 The fight was announced today by Oscar De La Hoya and Eddie Hearn on Social Media. This is the fight most boxing fans have wanted to see as Canelo is coming off of a win against former middleweight kingpin Gennady Golovkin in September last year and Jacobs beat Serhiy Derevyachenko last October to capture the vacant IBF middleweight title.

“I have always believed I can beat Canelo and, on May 4, I will get my chance to play it out.

“It’s been nearly four years since Canelo has faced an American challenger. It’s going to be a huge event where I believe I will cement myself as the best middleweight in the division.”

Daniel Jacobs went toe-to-toe with Gennady Golovkin back in March of 2017 when he lost the fight via a very close decision, although many boxing fans believed Jacobs won that fight.

The fight will be streamed live on the new streaming platform DAZN which signed Canelo Alvarez last year for a record 11-fight, $365 Million deal.