UFC: Carlos Condit has a new opponent and will now face Cowboy at UFC ON FOX 29

The long awaited rock ’em sock ’em fight between Carlos Condit and Matt Brown was cancelled on Monday. It was revealed that Brown had suffered a torn ACL over the weekend. This left Condit without a viable opponent. Most of the top ten welterweights are either matched up together or out injured. One welterweight though was up for the challenge, and it was Cowboy. No, it is not the more renowned  Donald ‘Cowboy’ Cerrone, but the equally vicious Brazilian Alex ‘Cowboy’ Oliviera. 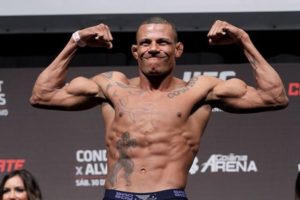 Combate earlier broke the news that Alex Oliveira had agreed to step up and fight. This was later confirmed by Ariel Helwani through Twitter.

Oliveira (18-4-1,2NC) is coming off a war with Yancy Medeiros at UFC 218, which he lost via 3rd TKO. Carlos Condit(30-11) is on a 3 fight skid, the longest in his storied career. Condit, once the UFC Interim Welterweight Champion will try to bounce back come April 14 on UFC on Fox 29. Both are serial finishers and the fight is not expected to go the distance.

Previous articleUFC: Darren Till talks about who he wants to face next
Next articleUFC 223 Embedded: Vlog Series – Episode 3