Chael Sonnen has a message for ‘Conor threw the first punch’ fans: ‘You can shove it up your a**!’

UFC 229 was one of the most eventful UFC events of all time. The card itself was great and the ending to the historic event was entertaining but controversial. In the post-event melee, two of Nurmagomedov’s teammates climbed into the octagon and had attacked McGregor. Later some videos had emerged in which the Irishman can be seen throwing the first punch as the attackers came towards him. This has led many of Khabib’s supporters to blame McGregor and because he threw the first punch and had asked the UFC not to ban Khabib’s teammates. Legendary veteran Chael Sonnen who had back Nurmagomedov going into UFC 229 was highly critical of people who made the argument that McGregor threw the first punch when asked about the entire matter. 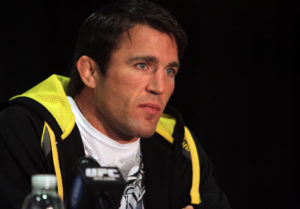 Sonnen was recently interview by Marc Raimondi of MMA Fighting. Raimondi shared his personal experience that he had experienced a lot of criticism for supporting the UFC’s decision of banning Nurmagomedov’s teammates. Thus, he asked Sonnen about his views on the subject. Here’s what “The Bad Guy” had to say about it:

First up, they can shove it up their a**. That whole thing was created by some wimp somewhere about the other guy has to throw the first punch. If you are engaging me aggressively and I let you within arm’s reach. I am a sucker if I allow you to throw the first punch. The first thing you do and remember this if your dad’s weren’t smart enough to tell you this, if you learned how to fight from your moms, or from your wimpy teachers in your liberal school districts. You don’t let somebody in an arm’s reach of you when they got that look in their eye. You keep them back and if they break it, you always hit them first.

Conor McGregor, who I’m not a defender of, was where he was supposed to be doing what he was supposed to do. He was a licensed fighter following the unified rule, which says in front of everything else, you protect yourselves at all time. He gets up on a cage and is confronted by somebody who is not licensed to be there and is not supposed to be there. He is not doing what he is supposed to do and a melee has broken out. Conor McGregor has every reasonable right to throw a punch at him and that did not start the fight. It began when Khabib climbed the cage and jumped in the crowd to attack Dillon Danis.

So your facts are wrong!

Previous articleEddie Alvarez close to signing a multi-fight deal with ONE Championship
Next articleAfter Khabib, Dillon Danis beefs with RDA in a winner takes all 200k match!