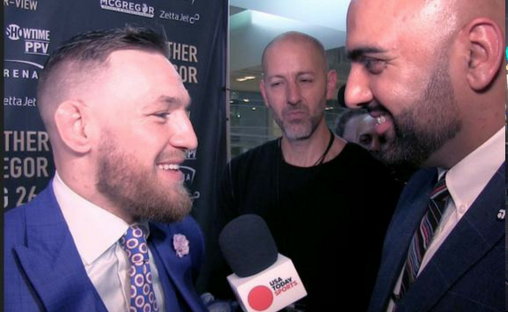 Veteran British journalist ,Chamatkar Sandhu, of Indian descent(we love that word), will be covering UFC Winnipeg and UFC 219 in December for www.mmaindia.com and The MMA India Show, the premiere Indian MMA Media agency.

The announcement was made last night IST on Chamatkar’s twitter feed.

More good news to share friends. While I'm on this side of the pond for the next month I've picked up a gig to cover #UFCWinnipeg Lawler vs. RDA & #UFC219 Cyborg vs. Holm for @MMAIndiaShow. I'll also be heading down to Detroit tomorrow to check out #UFC218 Holloway vs. Aldo 2. pic.twitter.com/AilxAtkUzd

Chamatkar is a reporter for the number one MMA media outlet in the world, MMAjunkie.com owned by the USA Today Sports Media Group since January 2015.

Chamatkar had also recently announced becoming a permanent resident in Canada and that he will be moving there next year.

I have some good news to share. I just completed my immigration process to Canada. I'm officially a permanent resident. I'll be in Toronto for the next 5 weeks before heading back to London and then relocate to the 6ix permanently next year. I'm so happy right now. 🇨🇦

The MMA India Show was launched in August 2016 and www.mmaindia.com in January 2017 and have very quickly become the No.1 MMA media agency in India (even if we do say so ourselves).

Stay tuned for all the MMA news and coverage from www.mmaindia.com this December.

Previous articleThe Ultimate Fighter Finale: Eubanks vs Montaño – Who Will Be The New World Champion?
Next articleThe Blessed Era