Former UFC lightweight champion Charles Oliveira is coming off of a stunning first-round rear-naked choke win over former title challenger Justin Gaethje at UFC 264 in Arizona last week. Despite putting on a terrific performance, he wasn’t crowned the champion as he had missed weight leading up to the fight.

Now the former champion has the opportunity to regain his title as he will be fighting for the title again against the next top contender. While many feel the next contender for the title is Islam Makhachev, the former champion feels differently. Islam Makhachev is coming off of an impressive TKO win over Bobby Green and is also currently riding on an impressive ten-fight winning streak. 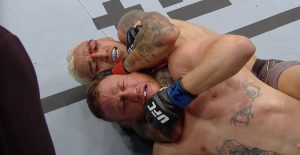 According to Charles Oliveira, the Russian should fight Beneil Dariush first in order to get a title shot. Islam Makhachev and Beneil Dariush were set to fight at UFC Fight Night 202 in February earlier this year, but the fight got cancelled after Beneil suffered an injury. Following this, Bobby Green replaced Dariush on short notice.

In an interview with MMAfighting.com, Charles Oliveira stated that he wants to fight the winner of Islam and Dariush in December in his home country of Brazil.

“I think the reality is, Makhachev has to fight Dariush first,” Oliveira said. “They both have to fight and then we’ll see who we’re fighting or not. Makhachev is super tough and deserves all the respect in the world. Dariush is also super tough and has a great team. It will be a great fight, so let them fight first and see what will happen down the line. Like I said, my focus now is going home and getting some rest, and my team will see who we’re fighting. I’ve never ran from a fight and never will. I’ll be there and I’ll be ready [to fight] whoever they put in there with me.”

“Everyone I beat, I’ve made it pretty clear. I never let it go the distance, I always finish them. Makhachev and Dariush are the two guys I haven’t fought yet and they both have to make this fight happen. Maybe [the next contender] comes from this fight. The thing is, it makes no difference to me. I’ll be ready. The champion’s name is Charles Oliveira.”