Chatri Sityodtong talks about the One Super Series Kickboxing League 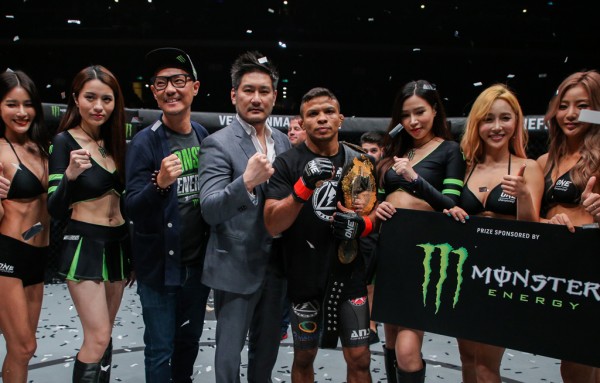 I’m thrilled to announce the ONE Super Series because it’s a massive, game-changing moment for the world of martial arts. ONE Championship has been a celebration of Asia’s greatest cultural treasure — martial arts — and the values of integrity, honor, respect, humility, discipline, courage and compassion. From my perspective, creating a super league that invites the world’s greatest strikers from all arts of Muay Thai, Lethwei, Silat, Karate, Tae Kwon Do, Sambo, Kung Fu, Sanda, Wushu — the martial arts that come from Asia — I think it’s a very huge moment in the history of martial arts.

For us, why is ONE Championship launching another league?

As you saw, we’ve signed already some of the world’s greatest martial artists. Our initial announcement of the warriors of ONE Super Series is already the greatest collection of strikers on the planet. No other league has this level of talent, this many world champions who have agreed to compete against each other. So when you think about what ONE Super Series is, it’s world champion versus world champion from all these different arts. It is the highest pinnacle of striking martial arts coming out globally.

ONE Super Series is an invitation for all the major disciplines of stand-up arts. We’ll be making some big announcements in the next couple of days. You’ve already seen some signings, those are already some of the world’s greatest strikers. The cool thing about this format is they can compete in the ring under international kickboxing rules, or they can compete in the cage with hybrid rules that give a little bit more flexibility, and obviously with 4oz gloves. So this is again, a real big initiative that for us is game-changing. If you think about the spectrum of all martial arts, MMA is a tiny part of all martial arts. It’s just one form of martial arts if you think about it. By definition, this makes us the largest martial arts organization in the world. Given our broadcast reach of 136 countries, 1.7-billion viewers around the world, and with all these different martial arts, it’s massive. If you think about what other organizations do versus what Starbucks does, Starbucks offers many flavors of coffee, and many flavors of tea. Our competitors are only serving one flavor of coffee. If you’re a boxing league, you’re only serving black coffee. If you’re a kickboxing league, you’re only serving green tea. If you’re an MMA league, you’re only offering mocha latte in your store, nothing else. And so combining and introducing all forms of martial arts competition with our ring and our cage at the highest level is why it’s such a big, big game-changing moment.

It works both ways. If you’re an existing mixed martial arts fighter in ONE Championship and you want to compete in ONE Super Series, you can do so as well and vice versa. If you’re in ONE Super Series and you want to compete in mixed martial arts, you can as well. So the idea is again, all the combat sports organizations in the world are single-unit typically, they usually only have one form of martial arts. Whereas we’re hosting now a whole variety of martial arts. And you’ll see some major announcements in the coming weeks.

Yes absolutely, I can’t comment right now because we’re in negotiations with a lot of fighters. It’s kind of funny, after we put the press release out and the names of Giorgio Petrosyan and Yodsanklai Fairtex and Sam-A Gaiyanghadao, and Nong-O Gaiyanghadao, and all Muay Thai legends came out — literally our inboxes and our phones have seen a massive influx from all the world’s greatest strikers. If you think about the movie Enter the Dragon where all the greatest martial artists came to come fight each other, this is what this league is about. It’s inviting the world’s greatest strikers to participate and showcase their skills against other great strikers from all discipline as opposed to pure kickboxing or pure Muay Thai. We’re already in discussion with a lot of stand-up strikers, and we should be making some big announcements in the coming weeks.

ONE Warrior Series is actually a whole separate league. That is for rising stars that we’ve discovered. Rich travels around all over Asia in a reality TV show kind of like Anthony Bourdain meets martial arts masters. He’s walking around and travelling and exploring the cities and cultures, the food, the flavors and the history of every country, but at the same time holding tryouts. And what you’ll see from all these tryouts is that we’ll be selecting a handful of fighters from each country and they will be competing in a ONE Warrior Series Tournament. So that is our league for rising stars, which is separate. We have ONE Championship, we have ONE Super Series for the world’s greatest strikers, and then we have ONE Warrior Series which is about finding the rising stars.

ONE Super Series will first start as an embedded part of ONE Championship shows, but eventually it’s going to be a standalone event by itself. In the same way, the ONE Warrior Series is a standalone event. You’ll be seeing our first actual tournament with ONE Warrior Series — with the rising stars of Asia — in March. We’ll announce the exact date. We have the date already but Rich Franklin will let me know the exact date. The ONE Super Series, on the other hand, eventually you’ll see many times a year, ideally every month minimum as a standalone event in the future. I don’t want to make any promises for this year because we have 24 events, but as ONE Championship scales to 52 events a year over the next few years, then you’ll see a big portion of that will be dedicated to the ONE Super Series.

Right now we’re at 136 countries, but there are 194 countries globally so I want to eventually get to the 194 country footprint globally, and I truly believe that ONE Championship can be the world’s largest sports media property. The NFL is the world’s largest right now with US $75-billion market value of the company, but it’s single-country sport addressing just 325-million people in a single country with no ability to transcend geography or transcend borders But for us, martial arts is genuinely Asia’s greatest cultural treasure. It’s a part of our history, our culture.

Previous articleJoe Rogan wants to help Ben Askren in potential contract negotiations with the UFC
Next articleJohn Kavanagh feels Mayweather-McGregor rematch will happen in the UFC; reveals his strategy for fight