Former UFC middleweight champion Chris Weidman hasn’t been feeling well from the injuries sustained in his fight against Uriah Hall at UFC 261 in Jacksonville last month. 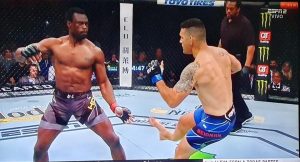 Chris Weidman revealed that he felt good for the first three to four days following the injury, but since then he is having a hard time recovering.

“I figured this would have been kind of like other surgeries I’ve had in the past where the first three or four days kind of suck and then it just gets better from there but to be honest with you, the first three or four days were probably the best days I’ve had,” Weidman said. “Maybe the anesthesia was still in me and the inflammation may have been helping with some of the pain because – how many days am I out? Eight days out, something like that, from the surgery – after the three/four days, it was just super painful. I’m just literally sleeping all day. I was really trying not to take the oxycodone, I was just taking Tylenol and ibuprofen and then at certain points throughout the day I may have taken an oxycodone if I really needed it,” Chris Weidman said in the video (h/t MMAFighting.com).

“The pain getting up to go to the bathroom or anything like that is so bad. When I have to go to the bathroom it takes such willpower and preparation mentally to get up because as soon as I start standing – well I don’t stand on the leg but on my crutches – the blood just starts pooling by my shin and my foot and just it is definitely brutal.”

Previous articleColby Covington trashes Conor McGregor for wanting a welterweight title shot: “He’s a joke”
Next articleAli Abdelaziz says Colby Covington will get a rematch with Kamaru Usman if he beats Leon Edwards