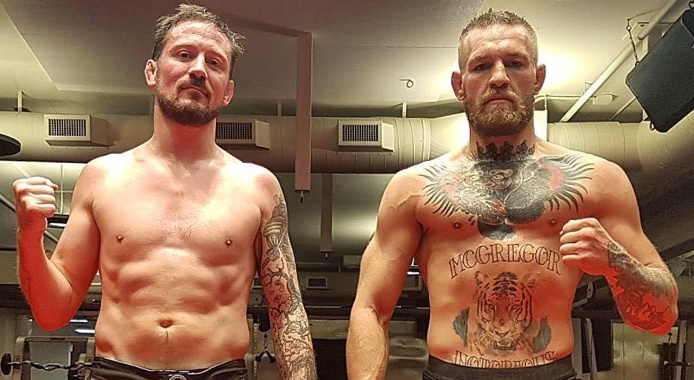 John Kavanagh, Conor McGregor’s coach recently on The True Geordie Podcast, said that Conor McGregor was offered $5million to fight Chinese Kickboxer. He said the offer was genuine as it came from a well-known boxing promoter.

Kavanagh said, “I had a guy message me just a few days ago; a Chinese kickboxer who wanted to do three rounds with Conor for $5 million.”
John Kavanagh also said, “And he was going to put it in escrow. It wasn’t like he was just joking. Because again I get a million messages like that a day, but you just don’t pay attention to them.“
Kavanagh said he knows the promoter well and though the fight idea was a bit weird, it was legitimate.
“This guy was connected and it was a legitimate offer. But I know he wouldn’t do it. You get the odd funny message like that. And like I said, it was a genuine offer. I know the boxing promoter well and he’s very well known. So he wasn’t going to come with an offer that wasn’t legitimate.”, Kavanagh said.

Conor McGregor last fought at UFC 229. His return to the octagon is uncertain as he is currently waiting for the consequences he might have to face for the post-fight melee at UFC 229 from Nevada State Athletic Commission.

Previous articleAriel Helwani’s favourite story of the week: Becky Lynch in the WWE
Next articleAlistair Overeem googled his UFC Beijing opponent Sergei Pavlovich to know about him