Cody Stamann is all set to fight fellow rising bantamweight contender Song Yadong at the Capital One Arena in Washinton DC. The fight will take place in the main card of UFC on ESPN 7.

The 30-year old has won four of his last five fights in the UFC. He defeated Alejandro Perez at UFC 235 via unanimous decision. Before that he lost to top bantamweight contender Aljamain Sterling at UFC 228 in September last year. 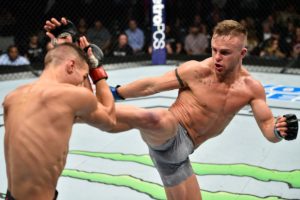 This is not going to be an easy fight for Cody by any stretch as the Chinese is coming in as the favourite and has won all four of his fights in the UFC. Although Cody admits that he was targetting a much higher-ranked opponent.

“I would have much rather had a higher-ranked opponent, but Song Yadong has a lot of hype behind him. A lot of people see him as another contender. I’ve been in positions like this before with guys where I’m coming in as the underdog. That does nothing but help boost my name. I think he’s a legitimate name in MMA, so beating him will be another step towards my ultimate goal of being the best.”

“I don’t know about the Shanghai PI, but the Vegas PI is absolutely unreal. Between the nutrition, physical therapy and strength and conditioning, it’s an absolute unreal facility. Not to mention that I can bring my coaches there and work out, and bring my own training partners in. It’s been a real game-changer for me. To have everything centrally located in one place makes everything so much easier. It takes a lot of the guesswork out and there are a lot more science-based things going into training camp. I’d compare it to Rocky versus the Russian. I trained like Rocky, now I’m training like the Russian. I feel like a different animal, honestly.”

Yadong is also eight years younger than Stamann and he gave his thoughts on the younger generation of upcoming fighters in the UFC.

“I think there are a lot of young, undiscovered talented guys coming in at bantamweight, kind of like myself and Song. But there are also the staple guys who are still contenders, a lot of them are still in their younger thirties. But some of them are in their later thirties and I can see them retiring. In two years, the division is going to look completely different. The same as when I got in UFC, the top ten looked entirely different than what it looks like now. I think I was one of the first new guys to crack into the top ten and start shaking things up. Now there is Petr Yan, Cory Sandhagen. It’s going to be a huge evolution, the next generation is going to take over. I’ll have a real low number next to my name really soon.”

“I’m fighting a Chinese guy and I’m an American. We’re known for being good at wrestling. I think that I’m going to be able to dictate where this fight happens. I think that’s going to be the key factor in beating him. I can decide if I want to take him down, it’s really hard to land shots on a guy who’s threatening a takedown. He’ll have to fight me differently, I’m really good at shutting down people’s offense while not getting hit with big shots. I’ve fought tough guys like him before. I just know that at the end of the fight, my hand’s going to be raised and a lot of people are going to wonder why in the hell the odds makers put me as the underdog.” Stamann concluded.