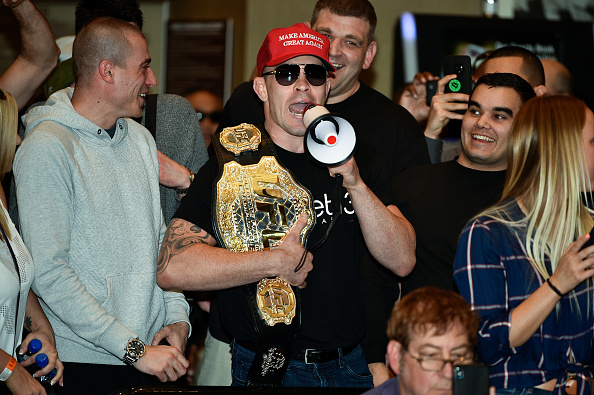 Colby Covington and Ben Askren have been throwing barbed tweets at each other for a while now. Colby Covington has called out Askren again for his controversial win against Robbie Lawler in his UFC debut.

Askren’s fight at UFC 235 did not go the way he would have liked, although he did manage to come away with the win. There was still a lot of space for criticism, as he was dominated early in the round, and when the fight was called, it did not look like Robbie Lawler was unable to continue. While Herb Dean has faced criticism for the decision, the fans and a few fighters, have not been too happy with Askren refusing a rematch to Lawler.

Covington is one of those fighters, and he recently called out Askren. He said that during the fight, Robbie Lawler had dropped him more times, and as a result, Askren should give his wrestling trophy, ‘Hodge trophy’, to Lawler.

“Ben Askren, he got dropped on his head. Let’s be honest, he should give his Hodge Trophy, that wrestling trophy, to Robbie Lawler, because Robbie Lawler took him down more times than he took Robbie down. And if it wasn’t for Herb Dean saving his life, he was going to get his head knocked into the first row. So the guy needs to run that back with Robbie Lawler and actually get a UFC win before he can start talking about the top of the mountain.” – h/t MMA Fighting

He went on to say that until Askren could beat Lawler in the rematch, he will not have achieved anything in the UFC.

Previous articleWale asks Israel Adesanya to do a movie with him where they ‘sleep everybody and talk a bunch of sh*t’
Next articleListen to the 911 call audio of Tony Ferguson’s wife asking for help (warning: distressing audio)
- Advertisement -