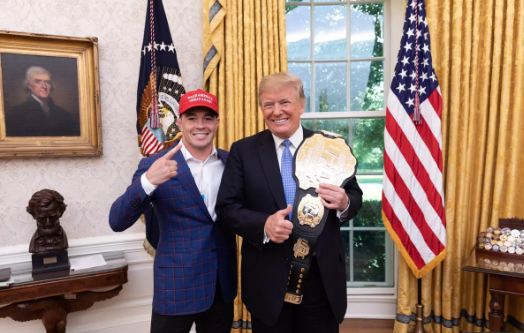 The UFC interim welterweight champion, Colby Covington has posted a photo to his Twitter on Thursday of a recent trip to the White House where he’s standing alongside Trump with a UFC belt slung over the president’s shoulder.

Colby Covington has been a self-proclaimed soldier of the Trump army for a long time.  Ahead of his interim welterweight championship bout with Rafael dos Anjos at UFC 225 in June, he stated that he wanted to personally deliver his welterweight strap to Trump at 1600 Pennsylvania Avenue after his victory in UFC 225 event.

“Promises made. Promises kept,” Covington wrote in the tweet, where he also thanked Trump for “putting America first.”

With a little help from his UFC Boss, Dana White, the Californian brawler fulfilled his longtime goal of making America Great again. According to a tweet from Assistant to the President Dan Scavino Jr., UFC president Dana White also visited on Wednesday.

Previous articleConor McGregor back at the #1 spot on the UFC ranking.
Next articleIndian MMA: Bharat Kandare releases statement about missing UFC 227