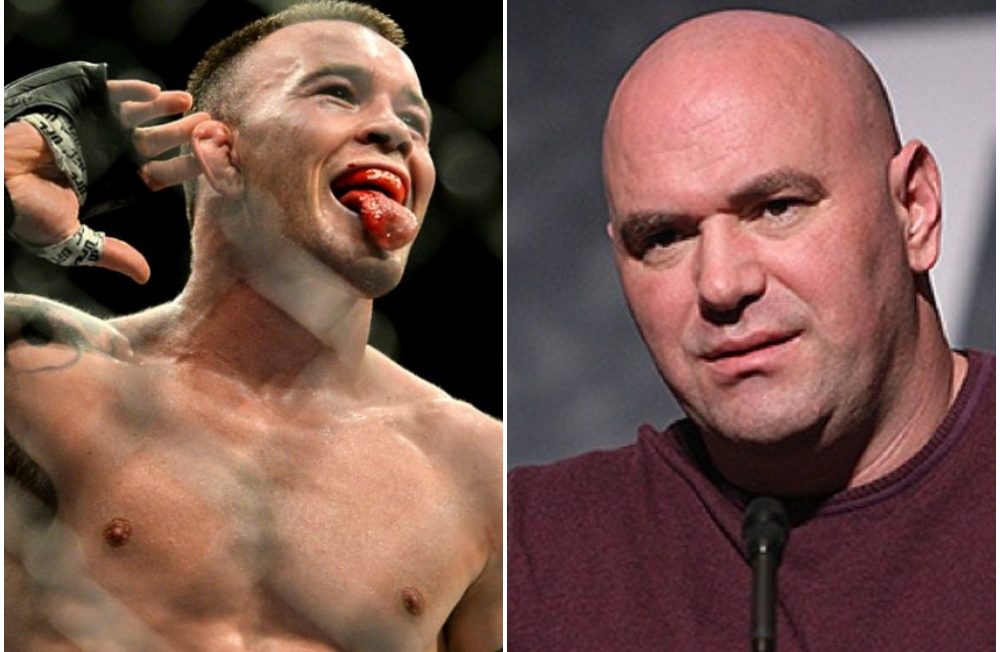 If you thought Colby Covington was done with making headlines after crashing into Kamaru Usman’s open workouts, then you’ve surely underestimated Colby’s knack for attention. This time Colby went after the big fish – Dana White himself.

A video of Colby Covington’s sudden and brief meeting with UFC President Dana White outside of Palm Resorts and Casinos made the rounds on Friday. A man hungry for answers, Colby, was however not satisfied with the ones that he got from Dana. While making an appearance on The Luke Thomas Show Colby explained how his search for an answer as to why he hasn’t received a shot at the title still remains unfulfilled.

“We talked for like a good five minutes,” Covington said. “I wanted to let him know what’s going on and this isn’t fair and I’m not going to be treated like this. I wanted to let him know that I can find him at any moment. He’s not safe, that’s the whole ‘nerd bash’ movement. No nerd, no virgin is safe. I will find you, I don’t care where you live. I will track you down, I will hunt you down, and I will get an explanation for this. And I can make your life a living hell.

“He just found out. That was just a little glimpse. That wasn’t even me trying last night. That was me easily f*cking finding out where he’s at. Just imagine what it’s gonna be like if he doesn’t give me a title shot after this weekend. I will find him, I will hunt him down and make his life a living hell.”

Riding a six fight winning streak, Colby won the interim title after defeating Rafael Dos Anjos at UFC 225. He was supposed to fight Tyron Woodley at 228 last September but Covington underwent surgery for a deviated septum and chronic sinusitus on July 24 and that ruled him out of that contest.

“Not really, he kind of left me out in the dark,” Covington said in regards to whether White told him anything conclusive. “He said some good things that I like to hear from him and I got some things off my chest. He was trying to tell me, ‘You’ve got to accept the fights when they accept the fights.’ I said, ‘Dana, man, I f*cking had nose surgery. Your UFC doctors, your UFC doctors — not my private doctor, your UFC doctors said I wasn’t clear to fight and I couldn’t fight. I’ve never turned down a fight one time in my life.

“I’ve been begging for the last two years to fight Tyron Woodley. He’s ducked me at every stop. He ducked me in January, he ducked me in November, he ducked me last year in December at the year-end show, so I wanted an explanation from him. All he could say is, ‘You’ve got to accept the fights.’ Dude, I’ve accepted every single fight you’ve given me. Just tell the people the real reason this is going on. This is corruption and it needs to stop.”

Dana seemed to be annoyed by Covington’s temerity and his attempt to film their conversation. Covington confirmed that the UFC boss was indeed upset.

“He was pissed. He was real pissed,” Covington said. “But I don’t give a shit. I’m not here to make him happy and I wanted to let him know that this ain’t fair. There’s justice. You robbed me out of a title fight this week. I’m supposed to be fighting for the title. All the fans want to see me fight for the title, they don’t want to see f*cking ‘Snoozeman’. That’s like they’re giving ‘em shit and they’re trying to say, ‘Oh, it’s filet mignon.’

UFC: UFC president Dana White says confrontation with Colby Covington in the Casino wasn’t as bad as it looked