COMPLETE CARD ANNOUNCED FOR ONE: WARRIOR’S CODE IN JAKARTA ON 7 FEBRUARY 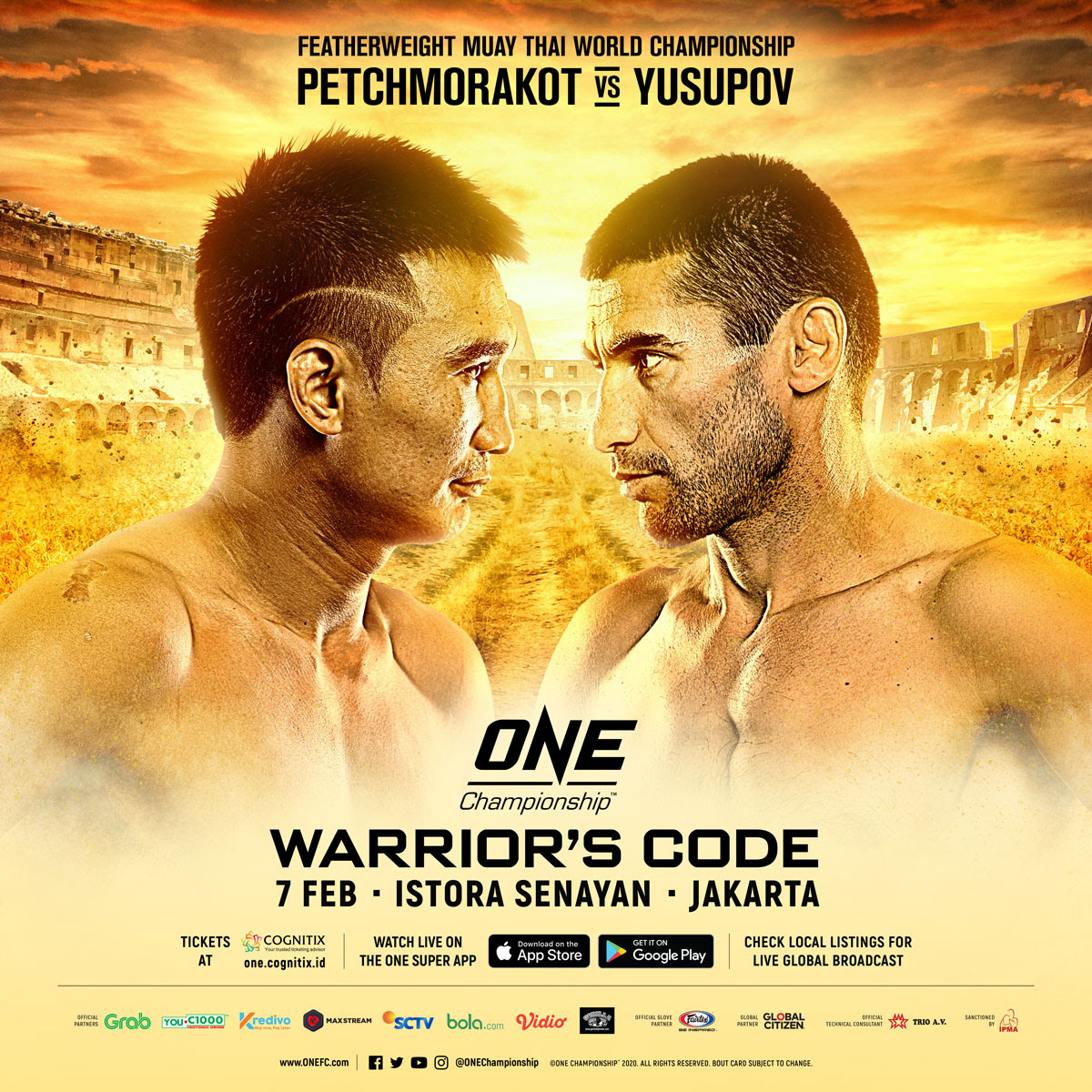 The largest global sports media property in Asian history, ONE Championship™ (ONE), has just announced its return to the Istora Senayan in Jakarta this 2020. The bustling Indonesian capital will once again play host to another world-class martial arts event. ONE: WARRIOR’S CODE, scheduled for Friday, 7 February, is set to showcase the absolute best in international and local martial arts talent.

In the main event, Thailand’s Petchmorakot Petchyindee Academy will take on Jamal Yusupov for the ONE Featherweight Muay Thai World Championship.

Multiple-time Muay Thai World Champion Petchmorakot is one of the most prolific strikers in the prestigious ONE Super Series. In a career spanning over 200 professional bouts, Petchmorakot has claimed Lumpinee Stadium World Championships in two divisions, as well as a WMC Muay Thai title, with victories over the biggest names in the sport, including the legendary Saenchai.

Yusupov, on the other hand, made a triumphant promotional debut last November, upsetting Thai legend Yodsanklai IWE Fairtex via second round knockout.

Petchmorakot and Yusupov will battle for the inaugural ONE Featherweight Muay Thai World Championship.

Making his highly-anticipated return to action is top middleweight talent Leandro Ataides of Brazil, who takes on the streaking Reiner de Ridder of The Netherlands. Ataides is currently riding a three-bout winning streak heading into this next contest, while de Ridder enters with a perfect professional record of 11-0.

Former ONE Featherweight World Champion Marat “Cobra” Gafurov of Russia returns in a bout against the undefeated Iuri Lapicus of Moldova in a lightweight contest. Gafurov is coming off an impressive unanimous decision victory over Tetsuya Yamada, while Lapicus extended his winning streak to 13 with a submission win over Shannon Wiratchai. The two square off in a highly-anticipated contest between top talents in the division.

Multiple-time Indonesian national wrestling champion Eko Roni Saputra is set to make his return to the ONE Championship ring, this time to face Cambodia’s Khon Sichan. Saputra earned a quick technical knockout over Kaji Ebin in his last outing. He’s now looking to make it two in a row when he takes the stage at home in Jakarta.

Japan’s Koyomi Matsushima has been spectacular so far in ONE Championship, posting victories over both Gafurov and Kwon Won Il. He recently challenged Martin Nguyen for the ONE Featherweight World Title but fell short of victory in a thrilling war. South Korea’s “The Fighting God” Kim Jae Woong called Matsushima out after a scintillating technical knockout victory over Rafael Nunes last November. Now the two are ready to meet inside the ONE Championship ring.

A bevy of Indonesian local martial arts talent are set to see action inside the ONE Championship ring.