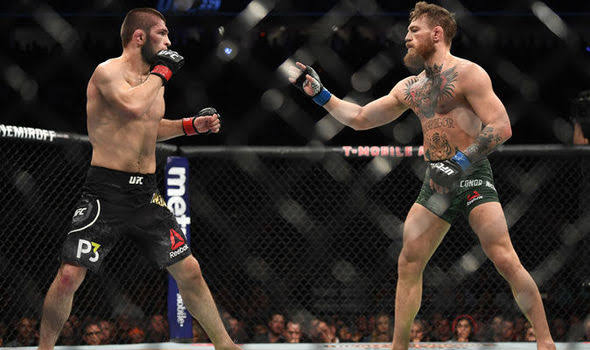 If the history of the UFC will ever be written, there will be a big chunk devoted to UFC 229. It had all the elements of a superfight. The long awaited return of McGregor, going up against a man whose name was synonymous with sheer domination in the form of Khabib Nurmagomedov.

However, the build up seemed to be way more interesting than the actual fight itself. As soon as the bell rang, the Sambo ace was all over the place. Khabib even bettered Conor in standup, which was expected to be the latter’s backyard.

But now, several months removed from his loss, McGregor thinks he has the answer for what happened, and wants the chance to fix it.

THREAD: Conor McGregor (@TheNotoriousMMA) says there was “dispute” in fight with Khabib Nurmagomedov (@TeamKhabib), calls him a formidable opponent. pic.twitter.com/MMYrRtYQnZ

“He’s a formidable opponent, wrestled bears since he was a kid, has put a lot of time in his standup work,” McGregor told fans in Chicago over the weekend (video courtesy of Mike Pendleton). “He was a lot sharper than I anticipated it was going to be. I’ve got to respect that. It was his big moment.

“It’s easy to do this once. It’s very easy for someone to be given something and to do it just one time. You put your absolute all into it. But to do it time after time and year after year, that’s when the motivation kind of dips, that’s when the dedication kind of lacks, and that’s when people creep up. That’s what I feel has happened here. I didn’t give him his respect, I marched forward, I didn’t give a sh*t, I got caught with that overhand. If I was switched on, I would not get caught with that overhand in any form of combat. I’m very confident, very eager, very in shape, let’s keep it going.”

McGregor went on to criticize Nurmagomedov’s strategy for not capitalizing after dropping the former with an overhand right. The strategy, however, turned out to be perfect for Khabib. He would finish the round with vicious ground and pound. McGregor was also heard saying, “It’s all business” at the end of the same round.

McGregor continues: “He almost dropped me, but then shot for the legs. Stand there and fight” pic.twitter.com/aLVqx3trsv

“Imagine almost dropping someone – because he almost got me, but he didn’t drop me – I got back to my feet, threw shots, threw a knee, and then he shot [for a takedown],” McGregor exclaimed. “Imagine almost dropping someone with a picture-perfect shot, a picture-perfect punch, and then shooting for the legs. You almost got the fight done and you shoot for the legs?! Stand up and fight.”

As expected, Conor also vouched for a rematch. He claimed that there was “dispute”  left in their last meeting.

McGregor: “There was dispute in this last fight. I slapped his brother and cousin around on top of the cage. He tried to jump out and run. This is not over. So there’s dispute, there’s got to be a rematch. pic.twitter.com/PLDcxavMWV

A rematch between the two will be at the pinnacle of what UFC can hope to achieve right now.