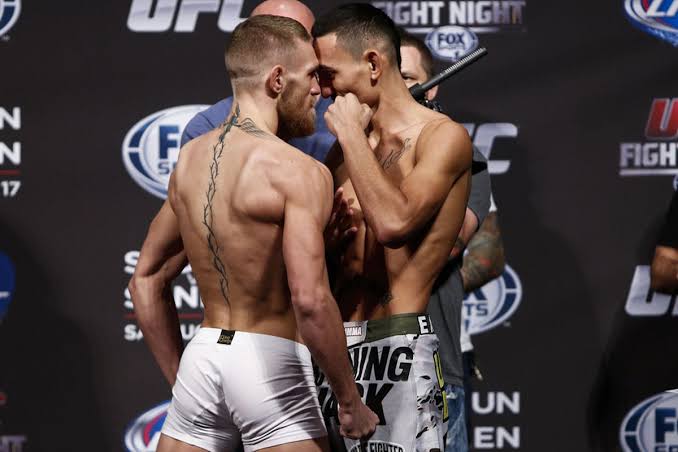 The rest is history as Holloway stacked up an impressive 13 fight winning streak to become the featherweight king and in conversation for the greatest of all time. That being said, McGregor was in Boston Saturday night attending the Boston Bruins-Columbus Blue Jackets game, the place where he handed Holloway that loss. 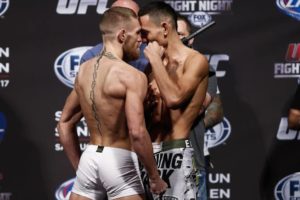 The double champ, known for his witty humour seized the opportunity to mock Holloway. McGregor took to Twitter trolling Holloway on losing their fight back in 2013. (via Twitter):

McGregor’s Garden!
Now where the fuck are them sunglasses? pic.twitter.com/HxWceONYhv

However both the fighters especially Holloway has grown leaps and bounds since then. McGregor was 25 however Holloway was only at the tender age of 21. The champ obviously wasn’t going to hold back as he did exactly what he does in his fights. Holloway is known for landing volume of strikes however this time he did so with tweets. Holloway tweeted a barrage of posts to get back at McGregor. (via Twitter):

lol there you are my bratha. glad you got to relive your best years today in Boston

but if we talking about the past remember this. I was 21. You were 25.

Holloway also pointed out at a common opponent in former UFC veteran Dennis River explaining his inexperience when he was young.

https://t.co/vgPHI79TxV You know who I share these trophies with? Nobody

And know this. I would beat 21 year old Max too but I would finish him in two rounds and not let him take my ACL

With champ Holloway moving up to lightweight to face surging lightweight Dustin Poirier for the interim belt and McGregor reportedly looking for a fight, a rematch certainly makes sense.

UFC: Conor McGregor has ‘long and meaningful conversation’ with a Reverend while doing community service at a Church