Conor McGregor, the UFC’s biggest star has finally got engaged to his long time girlfriend Dee Devlin and has announced their wedding on social media.

Conor McGregor posted a photo on Saturday of him and his girlfriend in which she is flaunting her beautiful ring. In the photo posted on Instagram, McGregor also announced their wedding. 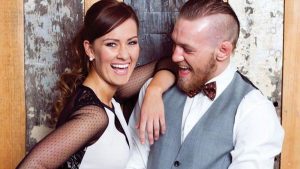 Conor and Dee Devlin have been together for a long time and she has helped McGregor a lot in his early days of fighting career. Here’s their Instagram post.

What a birthday, my future wife !

“What a birthday, my future wife!” wrote McGregor. Devlin’s 33rd birthday is this Sunday.

Conor McGregor and Dee Devlin have been together for 12-years

Conor and Dee have been together for twelve years. The two began dating in 2008, just before the athlete climbed to popularity in the MMA world, and are now proud parents to two kids 3-year-old Conor Jr. and 19-month-old daughter Croia.

The two have been together in this journey of life for the past many years as “Notorious” became the most popular combat fighter in the world and one of the most prominent figures in all of the sports. Conor McGregor, in his fascinating MMA journey, has earned hundreds of millions of dollars fighting primarily for the UFC and also getting his biggest paycheque against Floyd Mayweather in a boxing match which turned out to be one of the biggest combat sports events in the history of the sports.

In June, McGregor announced his retirement from the UFC for the third time in his career, he has earlier said he was retiring in both 2016 and 2019, saying shortly after his announcement that the game ‘does not excite’ him anymore. The former featherweight and lightweight champion was an intriguing figure during his career and was undoubtedly the biggest Mixed Martial Art’s biggest spectacle.

Hey guys I’ve decided to retire from fighting.
Thank you all for the amazing memories! What a ride it’s been!
Here is a picture of myself and my mother in Las Vegas post one of my World title wins!
Pick the home of your dreams Mags I love you!
Whatever you desire it’s yours ❤️ pic.twitter.com/Dh4ijsZacZ

McGregor in his retirement tweet said “Hey guys I’ve decided to retire from fighting,” he wrote. “Thank you all for the amazing memories! What a ride it’s been! Here is a picture of myself and my mother in Las Vegas post one of my world titles wins! Pick the home of your dreams Mags I love you! Whatever you desire it’s yours.”

Though Conor McGregor has always come back to fighting business even after he called it off several times, maybe this time he’s not going to come back for a long time as he is going on a new adventure of his life with his future wife Dee Devlin. The entire MMA world wishes good luck to Conor McGregor and Dee Devlin on their new journey.