Conor Mcgregor enters cage and pushes Marc Goddard: Will he get away with it? 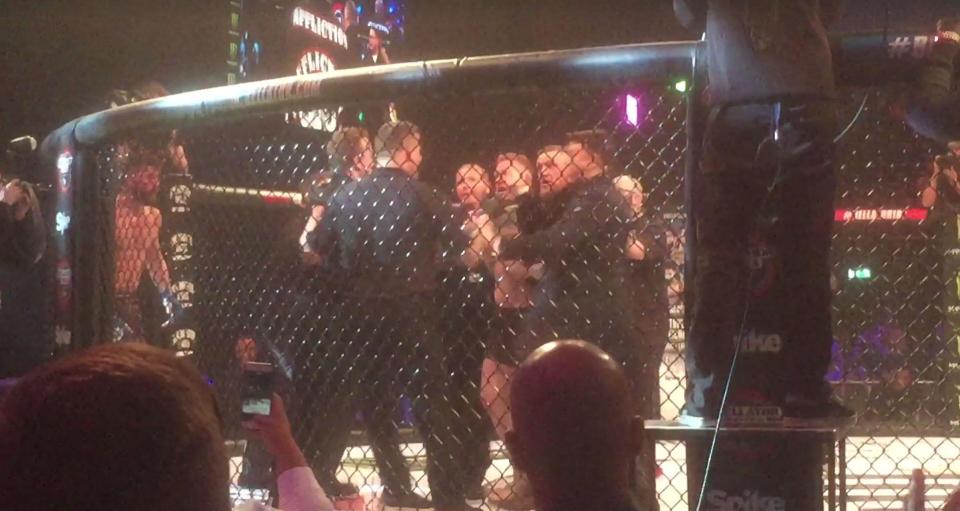 There were wild scenes at Bellator 187 as Conor Mcgregor jumped inside the cage to celebrate with Charlie Ward, his mate from SBG Ireland, where both of them train. He was then,as can be seen in the video, stopped from celebrating with Ward and asked to exit the cage. Conor though didn’t seem to take to this too kindly as he pushed Goddard and had a not so pleasant confrontation with him. Conor was then led away from the cage.

Only official corner men(or corner ladies) can enter the cage and everyone else is there at the discretion of the referee.

Just a few weeks back Marc Goddard had asked Conor Mcgregor to stop shouting instructions to a team mate since he wasn’t an official corner man.

It will be interesting to see how the UFC handles this as Dana White has on several occasions mentioned that you do not put your hands on the referee no matter the provocation.

Well know MMA journo Chamatkar Sandhu took to twitter to remind everyone of the same.

This is what Dana White said when he cut Jason High.
“I’m going to cut him. I look at that the way (Paul) Daley put his hands on his opponent after a fight was over. You don’t ever, ever f—ing touch a referee, ever. You’re done here.”https://t.co/huHk4PfqgR

Sandhu also provided some other ‘interesting’ facts about the confrontation.

It also seems that Conor slapped a commissioner who was trying to stop him from getting into the cage.

A crazy day in the neighbourhood. Seems they don’t call them the Fighting Irish for nothing.