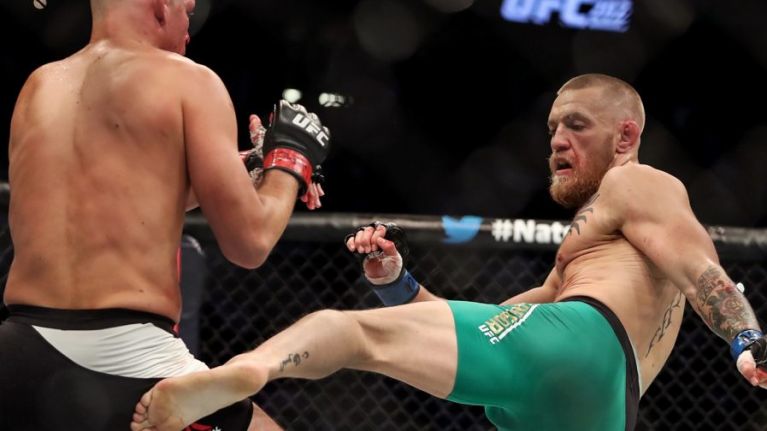 Conor McGregor—who first revealed that he broke his foot before UFC 229 via social media last month—went on to describe how he suffered the injury by attempting to land a front kick on an oncoming wrestler.

McGregor said the following in an interview with Tony Robbins :

“Two and half weeks out from my last fight I threw a front kick at a shooting Moldovan wrestler—a shooting wrestler is a guy that’s shooting in on your legs—and when he shot and I threw the front kick…I threw it at his belly and my two toes—my baby toe and the toe next to it—bent back like this and stuck in that position,” he explained.

“My doctor, who’s here with me now, had to come into the cage, stretch it and break it back into place. My foot swelled like a balloon, that was two and a half weeks out from my last fight.”

The former two-weight champion highlighted that he dynamic skillset can be a blessing and curse because even without his foot, he believed he could beat Nurmagomedov, yet given the severity of the injury, he probably should not have fought.

“It’s blessing for obvious reasons, I can throw many moves, I can stifle an opponent. A curse because when I face a serious injury where I probably should have just reset the match to a later date, my hunger and my knowledge that I just need one shot; I have one limb gone, but I have another seven limbs…the art of eight limbs, this is, so I can utilize other strikes in my arsenal.”

“The injury itself led me to half my workload. I couldn’t road run anymore, my weight was too high. So when you’re cutting weight and you can’t get your weight down because your weight is too high because of injuries and what not, I have a more intense weight cut. I was severely dehydrated, I didn’t sleep for 48 hours before the weight cut,” he said.

“These are all nonsensical excuses that I don’t give a f*ck about, I don’t give a sh*t. That’s why I walked in there hands down—ding ding ding—and walked forward to him and he went running around the cage.”