Unlike in other strategy games – the central element of the game will be global multiplayer tournaments, where players from all over the world will compete not only for epic in-game prizes but every player will have a chance to win real prizes worth tens and hundreds of thousands of dollars and a Conor McGregor’s special annual tournament winner prize! 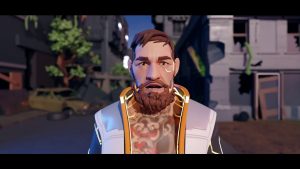 “Dystopia: Contest of Heroes” is an epic Build & Battle meets RPG strategy game set in the future world of cyberpunk. This mobile strategy game combines two of the top-grossing elements in the gaming industry: Strategy and Social.

Get a chance to meet Conor McGregor

The sci-fi theme makes this game a perfect fit for broad audiences and Conor McGregor as the face of the game will increase the audience size even more by including competitive sports fans. Despite being a mid-core strategy game, it was built focussing on a simple on-boarding process introducing the depth of the game level by level – allowing even casual gamers and non-gamers to on-board easily.

In Dystopia, the player starts the game as a rebel who finds a location for his base in a post-apocalyptic future world where the society is being controlled by big corporations. The Player has to build an empire by taking over districts of New York while collecting sci-fi themed gear, raid other players, and upgrade his base. More social players can develop alliances with over 100 other players and lead them into economic growth, support them in raids, or wage wars against other alliances.