The Irish sensation hasn’t fought in the UFC since his record breaking effort against Eddie Alvarez in December of 2016 but that hasn’t stopped him from hogging all the limelight since.

Apart from becoming a father, McGregor was frequently in the news throughout the year 2017 as he was involved in a boxing superfight with Floyd ‘Money’ Mayweather which he lost via 10th round TKO.

However, if UFC President Dana White is to be believed, 2017 was the best fiscal year for the UFC despite its biggest star McGregor never stepping into the Octagon even once.

Admittedly, the super fight with Floyd Mayweather netted all the parties involved eye-watering checks and the UFC is also speculated to have filled their coffers with upwards of $75 Million for a one day Showtime event in which they had little to no hand in promoting or setting up.

And while they have been locked in contract negotiations with McGregor ever since, trying to smooth over a deal, the Irishman has done plenty to keep himself in the news through social media.

Be it allowing us a glimpse into his flamboyant lifestyle or unfurling barbed tweets/IG posts at prospective opponents, McGregor has ensured that he is seldom far from public consciousness and that has, expectedly, reflected in him being the most searched athlete in the US. 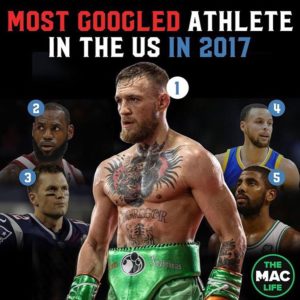 Of course, since the UFC hasn’t officially stripped McGregor of his Title yet, the result of the fight could still be inextricably tied in to the fortunes of the Irishman. We can only hope that he sorts out his differences with the UFC quickly and returns to fight in the Octagon.

Previous articleInterview with Katie Saull : SBG Fighter
Next articleMiddleweight Chad Hanekom aims to knock Aliskerov out of the top at Brave 10