UFC: Conor McGregor reacts at claims that he will be stripped of his belt 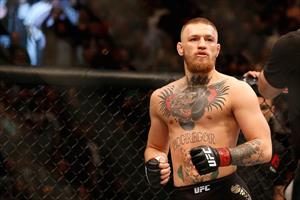 The UFC lightweight champion Conor McGregor won the belt in a highly dominating fashion against Eddie Alvarez at UFC 205. Since then he went on to have multi-million dollar boxing match against Floyd Mayweather. However, he hasn’t fought in the UFC in over a year and hasn’t yet defended his title. He has been holding the division hostage and is now on the verge of being stripped of his title. However, “The Notorious” has now reacted to the UFC President’s comments that he will be stripped via a tweet.

He had also claimed that he would be ready to step in and replace any of the two headlining fighters if needed. However, according to some claims made by Nurmagomedov he refused, when he was offered the fight by the UFC. “The Eagle” will now instead face the current UFC featherweight champion Max Holloway for the undisputed UFC lightweight title in the new main-event for UFC 223.

At the UFC 223 press conference, White had claimed that McGregor will soon be stripped of his belt. “Mystic Mac” took to Twitter and sent out a tweet stating that no one will strip him of his title. Here’s what he tweeted:

You’s’ll strip me of nothing you’s do nothing cunts.