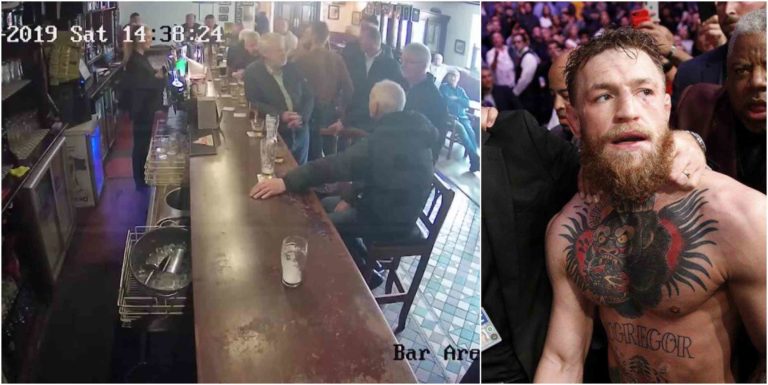 Last week, Conor McGregor angered a large section of the MMA community and fans around the world when a video was released of him sucker-punching older gentlemen in the head at a pub in his hometown of Dublin, Ireland.

According to TMZ which acquired the video, it was mentioned that the incident took place in early April. McGregor was out giving people a sample of his Proper No. 12 whiskey. The older gentlemen didn’t take the sample whiskey even after being given twice after which McGregor swung with his left hand and the punch landed on the side of the man’s face.

However, according to CCTV footage, Conor flexed his physique right after he attacked the old man.

“McGregor was seen doing something that he does after winning a professional fight — flexing his muscles and clenching his fists.

“The footage wasn’t used as ­evidence because it didn’t show any interaction between him and the man who was struck. The main CCTV used as evidence was the one presented to the DPP.” according to thesun.co.uk.

However, McGregor has apologised for the incident in an interview he gave to Ariel Helwani of ESPN.

“I was completely in the wrong. There’s no need to even discuss what began it, what was going on outside, inside — any of that.

“I was completely in the wrong. It was unacceptable behaviour and I accept that.