Conor McGregor “so happy” for Gunnar Nelson after UFC 231 win 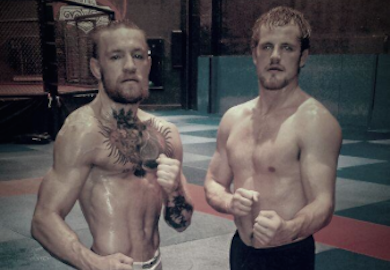 Gunnar Nelson had a splendid victory this weekend against Alex Oliviera at UFC 231 in Toronto when he  secured a rear naked choke at the second round to end the fight.

Gunnar(17-3-1 MMA,8-3 UFC) was able to open a brutal cut on Oliviera’s forehead after landing a pair of damaging elbows.Oliviera was fully bloodied up and Gunnar took no time from there to secure his back and sunk in a rear naked choke.

Gunnar’s return was much anticipated as he last fought in July 2017 in Scotland against Santiago Ponzinibbio  where he lost the fight via knockout.He has got 3 wins in his last 4 fights now and is optimistic about getting a title shot in the near future if he continues to win like this.

UFC superstar Conor Mcgregor who happens to be a training partner of Gunnar at Straight Blast Gym in Ireland was extremely happy to see Gunnar’s remarkable win over Oliviera.