Conor McGregor Superfan gets in trouble for supporting the Double Champ. 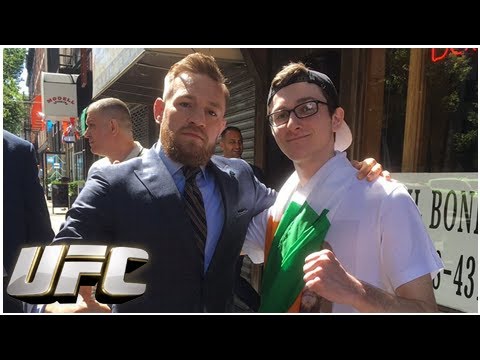 The hardcore Conor McGregor fan, who usually holds cards in support of the double champ, appeared again in support of his hero outside the court on the day of his final verdict.

The kid who goes by the name Robbie works as an MMA reporter for Barstool Sports. Robbie went viral after a video of him holding cards in support of Conor hit the interwebs during his last trial. He had also stated that Conor is innocent and the dolly slid from his hand and he never threw it with any bad intentions.

I don’t want to be in court today. I really don’t. But I have to be. #TeamMcGregor #FreeConor pic.twitter.com/RHRrHcR9OI

Robbie who showed up again today for the final trial of Conor in NYC appears to have landed in some trouble. The Kid posted a picture of him next to a bunch of NYC cops who were examining the megaphone he had in his hand moments ago.

We did what had to be done. Conor is free.

I’m now due in Criminal Court in October. See you there.#TeamMcGregor pic.twitter.com/PB8xCFSikz

Robbie has confirmed in a tweet that he is now due in Criminal court this October. Prima facie it appears as if the kid landed in some trouble for some minor offense such as noise contamination etc.