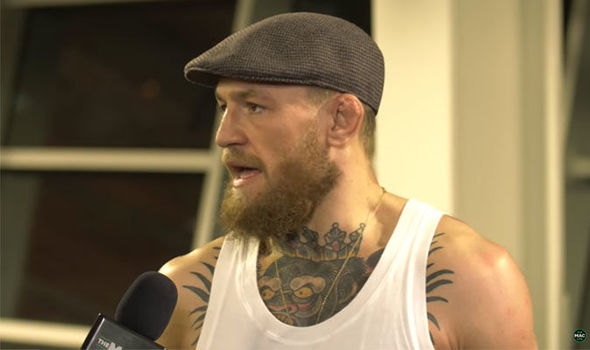 The biggest fight in the history of UFC between Conor McGregor and Khabib Nurmagomedov is less than a week away and ahead of the fight, Conor gave an exclusive interview to Andrew McGahon of TheMacLife.com in Las Vegas.

In 10-minute long interview, McGregor discussed a variety of topics, one of which was his displeasure with the UFC over how they stripped him of his belts.

“I fell out of love with the game for a bit, went off on to my own thing,” McGregor said. “Had many things going on. Now I’m back. I’m hungry to compete. And we’re here right on the cusp of it. Making weight, handling the media obligations. And that’s it.”

“I think I’m going to turn him into a bobblehead if I’m honest,” McGregor told TheMacLife.

“In there it’s a blank face and a new body.

“I see him turning into a bobblehead when I hit him. I feel his brain is going to rattle when he takes a clatter off me.

“That’s what I’m keeping in my head, but I’m a veteran now.

“I’ve said after every single fight, ‘What do you think is next? And you don’t know.

“It just depends on what comes up and what Conor fancies. I don’t know, but I always say, ‘Every fight is bigger than the last.’

“And without a doubt, after this one, the next challenge will be bigger than the Khabib challenge. So, I’m excited.

UFC: Brian Ortega makes a bold claim that his fight against Max Holloway will be Fight of the Year

Previous articleFollowing his loss at Bellator 206, Rory MacDonald says he didn’t mentally show up for the fight
Next articleKeri Melendez not happy with a split decision victory at Bellator 206