Former two-division UFC champion from Ireland, Conor McGregor is all set to fight Donald ‘Cowboy’ Cerrone at UFC 246. The fight is scheduled to take place this weekend at the T-Mobile Arena in Las Vegas.

However, ahead of his fight at UFC 246, he revealed to Ariel Helwani of ESPN in a sitdown interview that he is set to secure the biggest payday of his mixed martial arts career. 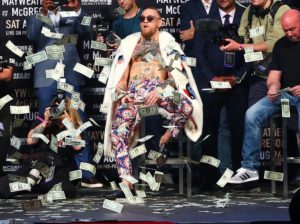 How much is Conor McGregor making?

Speaking to Ariel Helwani, McGregor revealed that he is making a staggering $80 Million/₹565 Crore for this fight.

"They think I'm toast, Ariel, but I'm still the bread." 🍞@TheNotoriousMMA says he made $50 million for the Khabib fight and predicts an $80 million payday for #UFC246 (via @arielhelwani) pic.twitter.com/UjpLhbDBAC

“Probably [the most ever] in my mixed martial arts career,” he added. “I’m estimating a good $80 million. Like I said we’ve got Australia and Canada and England and Ireland — it should be a good one.

“They think I’m toast, Ariel, but I’m still the bread.”

This is far more money than he made to fight UFC lightweight champion Khabib Nurmagomedov at UFC 229 in October of 2018. In the interview, he said he banked a solid $50 Million (INR 353 Crore) for the Khabib fight. He was ranked the #21 in the Forbes highest-earning athlete list in 2019.

For this fight, McGregor is guaranteed a purse of $5 Million ( INR 35 Crore).

The biggest payday of his career came against Floyd Mayweather Jr back in 2017. Although he lost the fight, he made a staggering $99 Million (INR 700 Crore) for that fight.