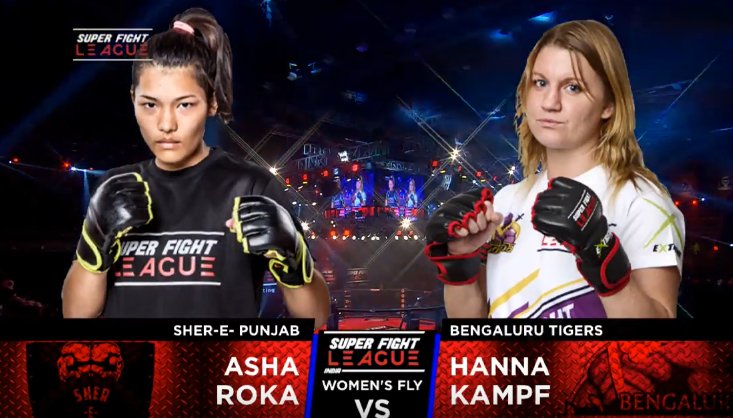 Last night, Super Fight League rolled out with the first of two semi final clashes of the tournament, with Sher – E – Punjab taking on the Bengaluru Tigers. The winner of the encounter would face the winner of Delhi – Goa in the finale next week, and with such high stakes on the line, the attention of the MMA world was on not just the fighters, but also on the officials.

With what transpired last week during the main event of UFC 208, the officiating has come under the scanner once again, and last night, it didn’t bode well for at least one official. The league format of the tournament meant that all the fights were scored according to the finish, and with Punjab picking up eight points in the first two fights, Asha Roka made her way out to take on Bengaluru’s Hannah Kampf.

Combat sport, in its very essence is dangerous; while the officials are to be given proper training, there will be times when the referees – for one reason or the other – fail to act in time. Whether it is a late stoppage or missing illegal strikes, one needs to understand that unlike everyone else, the referees don’t have the luxury of rolling back the clips and watch the action unfold multiple times.

However, last night produced a moment that was both scary, and controversial, which eventually clouded Punjab’s win over Bengaluru.

In the third fight of the evening, Asha Roka, considered by many to be one of the more talented women’s fighters in the tournament faced Hannah Kampf. Hannah needed to win the fight to bring her team back into contention, while Asha, with her background in boxing looked to end the fight early.

However, what transpired in the opening seconds left everyone speechless. Hannah immediately tried to close the distance and shot in for a takedown. However, Asha sprawled and synched in a guillotine choke, and finally got on top with a reverse guillotine. Hannah immediately passed out, and started convulsing before Dennis Hallman jumped over the cage, and intervened to get Asha away from Hannah.

Confusion ensued as to what happened, as even the commentators were left perplexed for a few seconds as to why the action wasn’t stopped. While Hannah’s muscle memory took over for a split second, it was fairly obvious for the fans to see that Hannah was passed out. Unfortunately, the fight wasn’t stopped at that moment, and it took UFC veteran Dennis to step in, and force Asha off Hannah.

While the Sher – E – Punjab team eventually won to advance to the finals, their victory was clouded by the controversial nature of the finish of the women’s flyweight bout. We later caught up with the referee, Alan Fernandes, and Alan immediately owned up to his mistake, and apologised for not stepping in. Alan gave his side of the story, and said that the angle he was in did not give him the opportunity to watch Hannah’s eyes, or if she had passed out.

Do check out our interview with AIMMAA’s Alan Fernandes.

Here are all the results from the first semi final of the tournament.

Asha Roka defeated Hannah Kampf by submission in round 1

Sascha Sharma defeated Patrick Benson by submission in round 1

Jagz Singh defeated Seth Rosario by TKO in round 1

Hemant Wadekar defeated Amit Sawant by submission in round 1