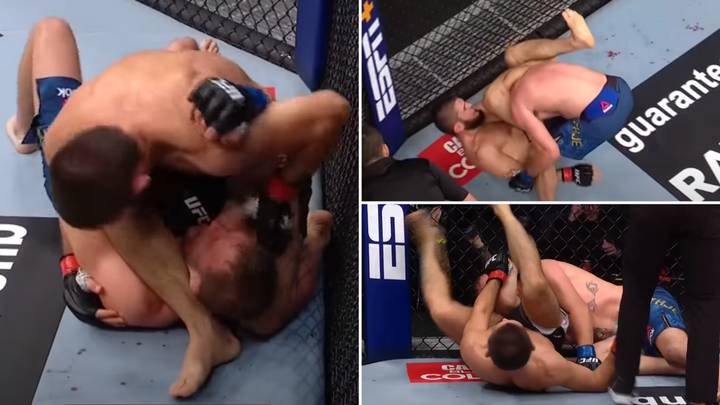 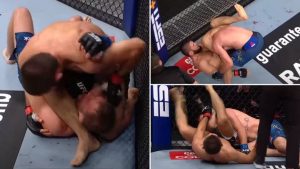 Before going into the fight, there were a lot of questions asked about whether Khabib will be able to take Gaethje down, given the wrestling abilities of the American. Khabib’s plan was clear, as always, to take his opponent down against the fence, and maul. And that’s what he did. He kept in mind what Justin kept saying during the pre-fight interviews, that he will not tap no matter what. This is what led Khabib to switch to the triangle. In a conversation with the Eagle after his fight, Daniel Cormier explains this.

“There were a number of little things that played into the Justin Gaethje submission,” Cormier told Ariel Helwani. “He told me when he was watching the interviews over the course of the week, he saw that Justin said he would never tap. And when he was going to the submission — it’s his dad’s favorite submission — get into mount, going into the armbar and go into triangle.So when he got there, he was going to do the armbar, but he had heard Justin all week saying he would never tap, so he didn’t want to hurt him in front of his parents, so he went to the triangle. I promise,” added Cormier.

“To be comfortable enough to think about this in the moment, like, that’s crazy. He didn’t want to break his arm. Because if Justin’s not going to tap, you have to break it. And he did not want to do that to Justin in front of his mom and dad. He said, ‘if I put him to sleep, he will wake up and everything will be okay.’”

The lightweight division in the post-Khabib era

The dynamics of the lightweight division have changed after Khabib’s retirement. The title of the most stacked division in the UFC is now vacant, and fighters like Conor, Justin, Poirier, Chandler are fighting for the throne left behind.

It is likely that Conor and Dustin will now fight for the title. And Tony Ferguson fights Mike Chandler.