The highly anticipated heavyweight title clash between Anthony Joshua and Kubrat Pulev has been cancelled due to the coronavirus epidemic.

WBO, WBA, IBF heavyweight champion Anthony Joshua was scheduled to defend his title against Kubrat Pulev on June 20th at the Tottenham Hotspurs stadium in London. 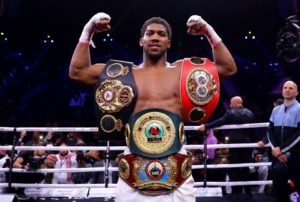 Title challenger Kubrat Pulev confirmed the news. The former European heavyweight champion revealed that the fight will take place at a later date in the same venue.

“The match will take place a few months later, perhaps towards the end of the year.”

Kubrat Pulev is coming off of a unanimous decision victory over Rydell Booker last November. On the other hand, Anthony Joshua became the two-time heavyweight champion when he defeated Andy Ruiz Jr over twelve rounds.

The fight took place in Riyadh, Saudi Arabia and was a rematch after Ruiz brutally knocked out Joshua in the seventh round in June of 2018. It was one of the biggest boxing upsets in heavyweight history.

Anthony Joshua vs Kubrat Pulev could be pushed to July

Anthony Joshua’s promoter Eddie Hearn revealed that he is constantly in talks with Tottenham management regarding the venue. There are potential plans for the fight to be moved to July.

“A requirement for Anthony in his next fight, a necessity for him was to box in the UK.” Hearn told Sky Sports.

“June 20 is a long time away, it’s still in our plans. We have been speaking to Tottenham and making sure that we’re all on the same page.

“For the Anthony Joshua fight, already potential plans to move that fight back to July.

“We hope that they won’t need to be moved, but we also understand this is constantly evolving.

“We do have a potential date for that, but right now, hoping June 20 can remain the date.”

This would have been Anthony Joshua’s first fight at home since September of 2018. He last fought in the UK against Alexander Povetkin at the Wembley Stadium and knocked him out in the seventh round.

Who do you guys think wins in a fight between Anthony Joshua and Kubrat Pulev?