Before the fight, both fighters were present at The Rooftop at Pier 17 in NYC for the press conference to promote their upcoming mega-fight for the “Baddest motherf***er in the game” belt.

However, even though both these guys were promoting one of the biggest fights of the year, they were both respectful at the press conference and no trash talking took place and neither fighters took personal jibes at each other during the entirety of the press conference. 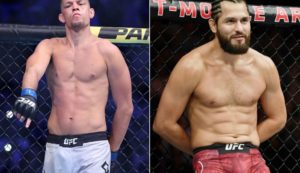 Masvidal was asked if he would like to repeat the same performance on November 2 like he put on against Askren and Till, where he knocked them out, to which he replied that Nate was a different calibre of a fighter compared to others.

“He’s a different caliber than the guys that you mention,” Masvidal said. “I’ve seen him pull up and up in some tough situations and win those decisions. I’ve got whatever it takes, man.”

“I am ready for it man…I have been doing this for a long time….I love to compete and I love to compete at the highest level possible and I love knowing that the opponent in front of me is somebody that is known for kicking ass and that’s what’s motivating and I am more ready than anybody,” Masvidal said.

Nate Diaz shared the same sentiments and he acknowledged that the fight sells itself and that there was no need for any kind of trash talking.

“There’s really not a lot of trash (talk) going on in the fights I’m in anyways, so it’s just like normal,” Diaz said. “I’m just happy to have a worthy opponent and a worthy venue to be in.”

Further, in the press conference, Nate was asked by Ariel Helwani as the reason Masvidal agreed to fight him even though there were talks about him fighting Kamaru Usman for the welterweight title.

“You can either fight for the phoney belts or you can fight for Baddest motherf***er in the game belt,” Diaz replied.

Nate Diaz last fought against Anthony Pettis at UFC 241 and won via unanimous decision. It was also his first fight in three years.

GSP hails Nick Diaz; says he could have beat Tyron Woodley for the UFC title