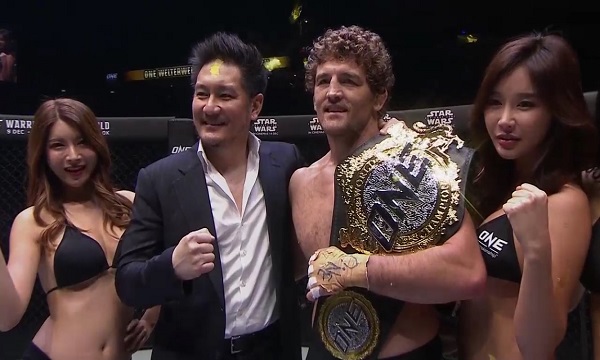 Four days ago, on 24th November, I was sitting in the media section close enough to the cage, to witness ‘ONE Championship: Immortal Pursuit’ – Asia’s biggest MMA event of 2018 held by Asia’s largest Martial Arts promotion, ONE Championship™ (ONE). It literally took me couple of days, to let this high-octane experience of being up-and-close covering the fight week sink in. I was there to represent MMAIndia.com to cover the pre-event activities, interviews, fight analysis and post event activities was nothing short of a surreal experience. To make matters more exciting, this historic event featured some of the biggest names from the Asian MMA circuit – Ben Askren, Shinya Aoki, Mei Yamaguchi, Amir Khan, Adrian Pang and Might Mei Ooi.

Fight week kicked off with the Press Conference held in the ‘Simpor Junior Ballroom’ at the Majestic Marina Bay Sands. Upon arrival, media completed the registration formality and were handed over the cool ONE Championship carry bag, which included them media kit, details on the fight card, ONE Championship booklet, a t-shirt and ONE branded pen drive. There were plenty of photo opportunities for the media and other guests with the ONE Championship belt on display and the backdrop.

The conference room was filled with close to 100 media people from across the globe – India, Malaysia, Indonesia, Thailand, UK, USA and Australia. Buzzing with anticipation and eagerness to meet the fighters and the CEO himself Mr. Chatri Sityodtong. Hosted by Mitch ‘The Dragon’ Chilson, whose electrifying energy and enthusiasm got everyone in attendance on their feet, while the opening AV set the mood for things to come.

Six fighters were welcomed onto the stage with brief introductions followed by ONE Championship CEO Mr. Chatri Sidyodtong. In his opening speech, Chatri shared his vision to unite the 4.4 billion people who live in Asia and celebrate together Asia’s greatest cultural treasure – Martial Arts and the deep routed Asian values that martial arts espouses – Integrity, Humility, Honour, Respect, Discipline, Courage and Strength. As he neared his speech and spoke more on paving the way for Martial Arts in Asia, it was clear that not only is he passionate in executing this vision, but he is THE ONE who can make this happen. There’s a huge responsibility that lies on his shoulders, now that ONE Championship has ambitious goals heading into 2018.

ONE athlete’s Vy Srey Khouch, May Ooi, Adrian Pang, Amir Khan, Shinya Aoki and Ben Askren who were present on the stage expressed their views on being part of this unforgettable martial arts action that was going to set the bar high on 24th Nov. 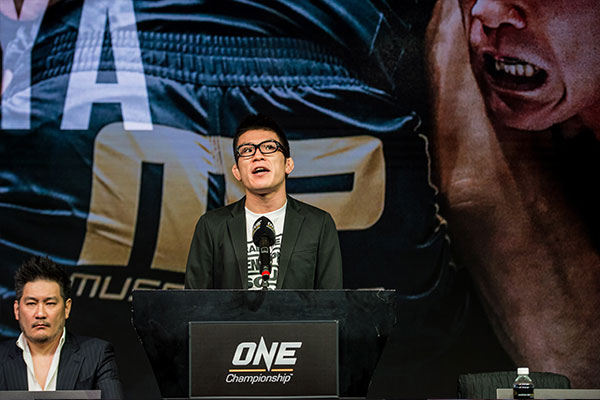 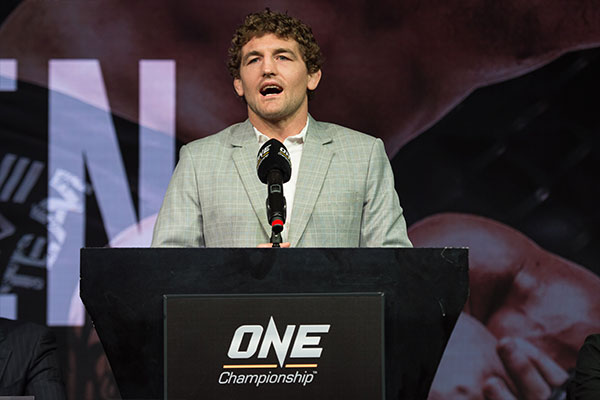 The Q&A session followed between the media and those present on the stage. A lot of interesting questions were thrown at these fighters and Chatri, who gracefully replied with full honesty and openness.

At one point, Chatri was asked how would he react when any of the ONE athletes would behave in an unprofessional way either inside or outside the cage. His response had everyone cheering and clapping as he reminded the DNA of ONE Championship and how since day one it was all about uniting the Asian continent and celebrating martial arts.

Post the press conference the face-offs between the fighters followed and more one-on-one questions with them. Once, the media was done with their endless questions, everyone headed to Ce La Vi, Marina Sands Skypark for a party to unwind and call it a day. 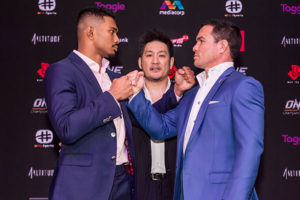 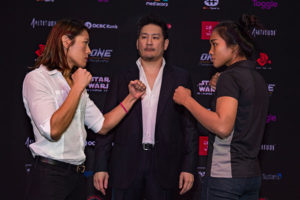 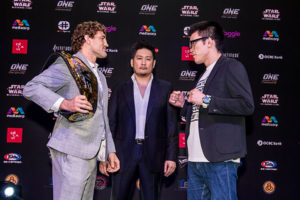 I headed to meet India’s Puja Tomar who was making her ONE Championship debut against Tiffany Teo to get to know how she prepared for this tough match up and delve into her background.

We’re headed to the Singapore Indoor Stadium for the fight night along with the rest of the media. Ring girls Kim Jina and Song Garam welcomed the crowd with their Dj’ing skills and set the mood for the night’s 10 fight stacked card. 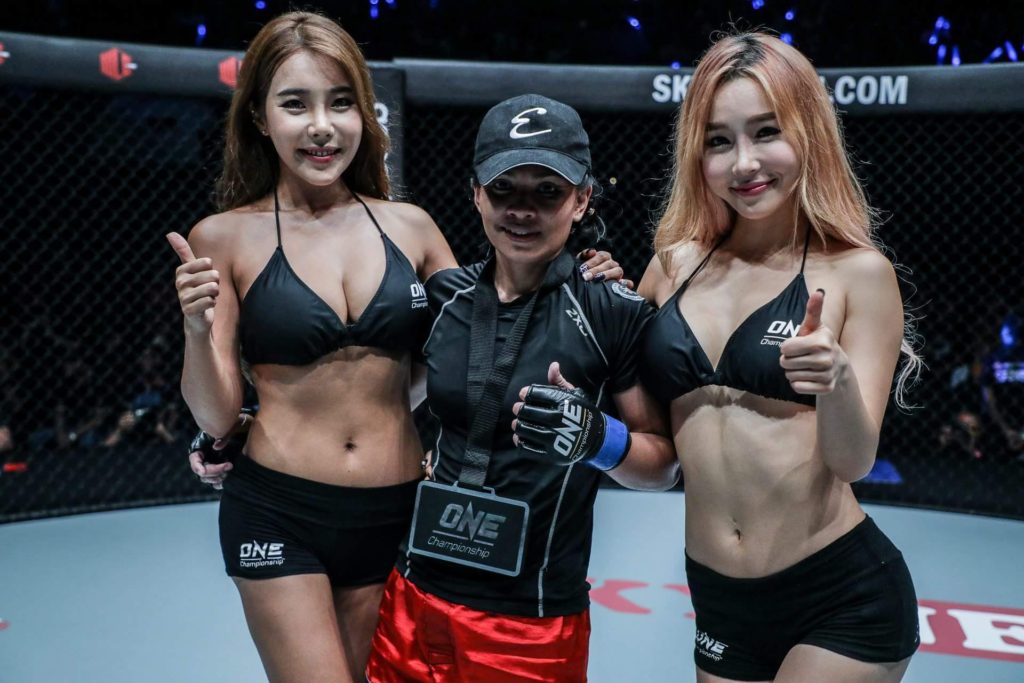 Media team were separately led into the building with ‘Crew’ tags on the wrists to the specially allocated media section just opposite to the cage. Crowd started to pour in and settle down in their seats to the enchanting performance by a female singer.

The whole event was planned and executed perfectly without any glitches. Right from the music, to the lighting, to the surprising performances – everything was world class. The whole stadium was jam packed, right from the bottom to the top row seats. As the fights progressed, what surprised me the most was the understanding of MMA as a sport and the technical knowledge Singaporeans possessed. They appreciated the fighters whenever they made a technical move and tried to execute an armbar or choke. The crowd even showed respect and support to the non-local fighters who displayed true grit and heart with their performances. 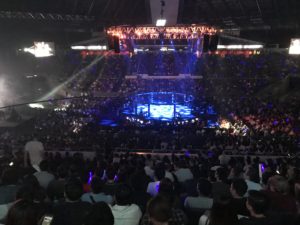 It was truly a night of world class martial arts action in every aspect. Be it the production, the fights, the announcements, colour commentary team – Michael Schievelo & Mitch ‘The Dragon’ Chilson. The whole experience of being able to watch these world class fighters perform under the ONE banner has truly left me wanting for more and return to Singapore to live it once again.

A big thanks to the MMAIndia.com team for having me on board to cover this event and the team of One for being such great hosts. Until next time! 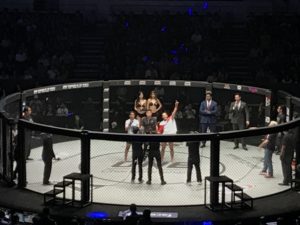 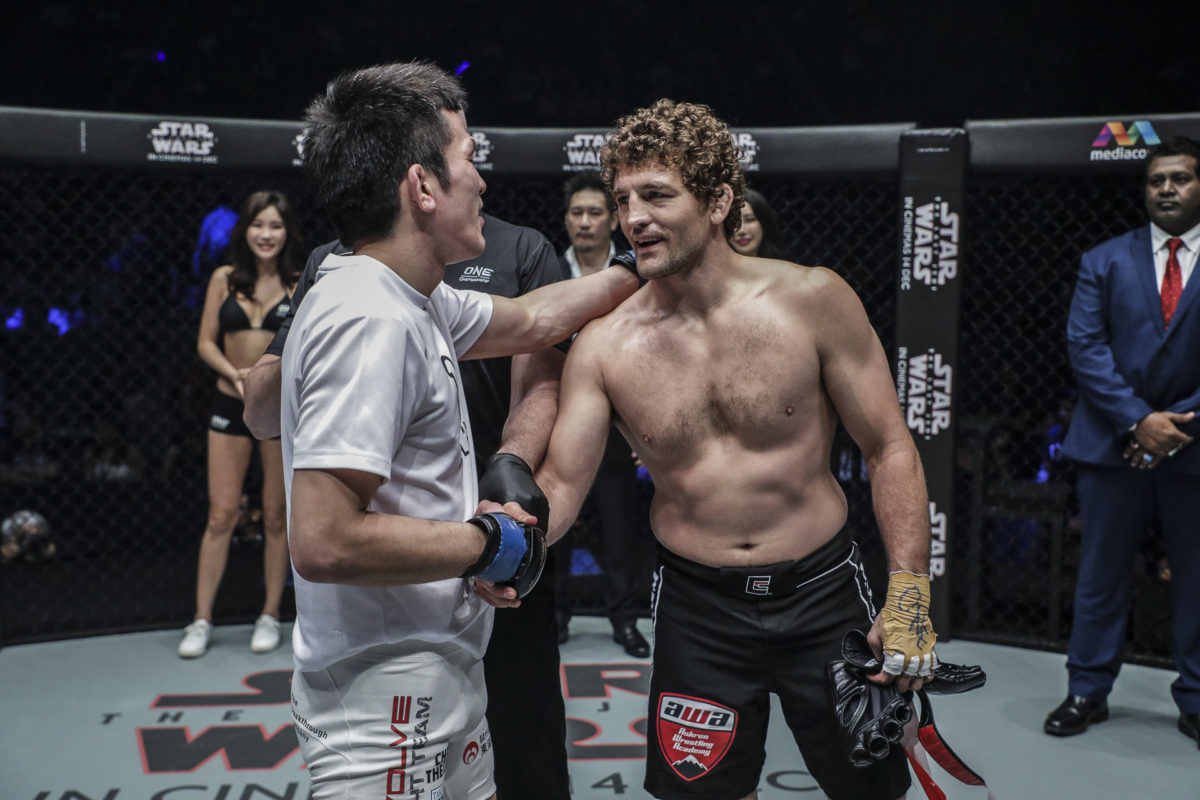