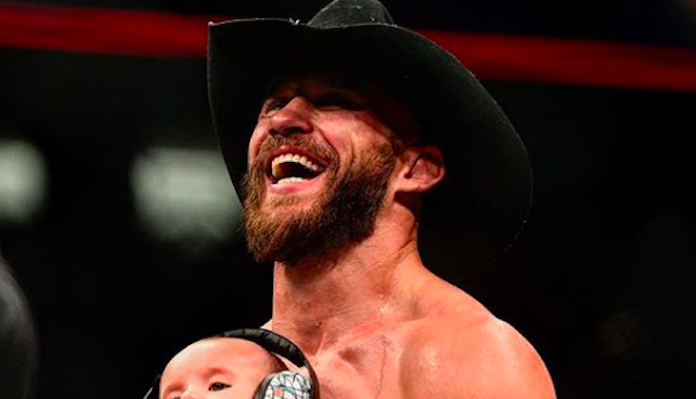 Though he said before that he was not interested in chasing McGregor anymore, Donald “Coyboy” Cerrone was not reluctant to call out Conor McGregor again after his fight against Al Iaquinta at UFC Ottawa last Saturday night.

”I want the title, whatever that means, man!” Cerrone told Michael Bisping in the cage as he held his son in his arms. “Unless, Conor McGregor, you want to fight me in July. I’m ready. Fourth of July, let’s do it!”

Watch the interview down below (Courtesy : ESPN)

About the fight, Cerrone said the following in the post-match interview :

“I felt terrible starting the fight, I couldn’t find it, man. Back in the locker room, I didn’t want to warm up, I didn’t want to get ready. I didn’t want to fight until the second round. People always say I’m a slow starter and, ‘What Cowboy are we going to get?’ We train hard, we train so hard. We try and find a way so we can show up and beat opponents on our worst day. Today was my worst day. Thank God, it’s been 41 fights because I was able to fake it until you make it because if you fake it long enough, you find it. In the second round, I was like, ‘There it is, let’s go to work.’ I think the younger me would have quit.