Majority of the MMA fans want to see Cyborg fight Nunes in a rematch, but UFC president Dana White said that Cris might leave UFC for easier fights elsewhere. Cyborg is coming off of a unanimous decision victory over Felicia Spencer this past Sunday at UFC 240 in Edmonton, Canada. 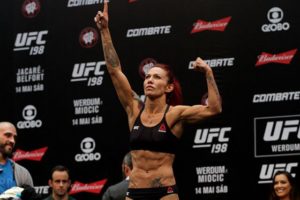 But these comments from White haven’t gone down well with Cris Cyborg who feels that White should issue a public apology for misleading the fans.

“I think a lot of things have to fix and change for [me] to have more fights in UFC,” Cyborg said in a recent appearance on Ariel Helwani’s MMA Show. “Everybody who follows my career knows my struggle with UFC. They know I never start fighting with UFC because the promotion want me to be there. No, it was the fans pressure. I have the opportunity to be in UFC because my fans put so much pressure [on them]. It’s not because they wanted me there.

“They don’t help me. They don’t help me grow my brand. All the time they try to damage my brand, especially Dana White and he’s the head of UFC. If you look at the face of UFC, who is the face of UFC? Dana White and he continues to damage my brand. It started a long time ago. It started when I was in Strikeforce. I don’t know what his problem [is] but he continues doing this and I proved him wrong.”

At this moment Cyborg says that Dana White has to apologise to her if the UFC wants to re-sign her.

“Of course he has to apologize,” Cyborg says. “He has family, he has kids and I think if he wants to be honest, he’s supposed to do this. I don’t know if he has a heart, but what he’s doing is not just [affecting] me. He’s [affecting] people around me, my family. It’s not right. When you’re doing these type of things, there’s no avoiding my family. He’s [affected] them. . .

“[And it must be in ] public. It’s easy to talk [in private] like Joe Rogan. Joe Rogan said ‘I’m sorry’ when there were no cameras, just by myself. No, you want to talk about me, how I have a dick, you have to talk in public. You’re not a man, to me you’re not a man. If Joe Rogan a man, he will say I am sorry in public, like what he said. Not coming behind in the room and talk to me in my ear. ‘I’m sorry.’ This is not type of man that I know.” (H/T – MMAfighting.com)

Do you guys think Dana White will apologise to Cris Cyborg?