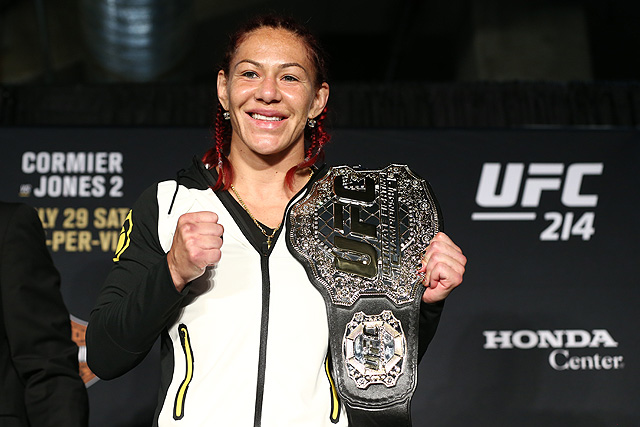 The UFC Women’s Featherweight Champion Cris Cyborg is undoubtedly the best female fighter on the
planet. But before she began her stint with the UFC, it was Ronda Rousey who was a super star for the
company until Conor McGregor surpassed her status. Many would consider Rousey and McGregor two
of the best fighters on the planet, but Cyborg considers them the most overrated fighters in the UFC.

“I think in UFC it’s Ronda Rousey. Everybody think she is the best fighter ever pound-4- pound,
then you see when she fights real fighters she had a hard time. And then, you know, (Conor)
McGregor never fights anyone tough. I would like to see him fight Jacare (Souza) and then
have the opportunity to fight Khabib (Nurmagomedov).”

The Brazilian pointed out that Rousey’s skills were put to the test when she fought ‘real fighters’. This
was said in relation to her past two beat downs in the hands of Holly Holm and Amanda Nunes where
the former Olympian’s weakness was exposed. Even Joe Rogan admitted that when the level of female
fighters had risen to the next level, Rousey had fallen victim to the intense competition.

Moreover, Cyborg rips The Irish superstar stating that ‘The Notorious’ one has not fought anyone as
tough as Jacare Souza and Khabib Nurmagomedov. After McGregor’s thirteen seconds knockout over
Jose Aldo, he never faced any great fighters who were considered a serious threat to his title reign
(though he was tapped out by Nate Diaz in a non-title bout). The Notorious one didn’t defend either of
his belts.

“You know, McGregor’s a big name but we don’t know if he’s a real fighter because he needs to
fight guys who are really tough guys in MMA. I don’t like when you put the name, the sport on
two person, and the name of the person. ‘Let’s promote women’s MMA but the only face is
Ronda Rousey’ You can not do this because now she retired.”

It’s true that Ronda Rousey is the face of the women’s MMA being the first ever female fighter signed
with UFC and dominating the division for a long time. But the time has passed and people have moved
on to cheer the likes of Holly Holm, Rose Namajunas and Joanna Jedrzejczyk. So Ronda Rousey is not the star of the division anymore and it’s high time to promote other female fighters.

“You have to promote all the girls, all the girls make the sport going. Same thing with
McGregor, all the sport, all the guys make men’s MMA, you know. It isn’t just one face because
when Ronda retires, no she takes a break, McGregor takes a break then just wants to come
back when he won and this is not how the sport is going.”

Despite Cyborg claiming for fair treatment among all male and female fighters but only certain athletes
have both the star persona and the abilities to be the best. Not everyone who steps inside the Octagon
attract the same fan base that of McGregor and Rousey. The two stars have broken Pay-Per- View
records and have generated high income for the company. So as a result, it’s also unfair it they don’t get
royal treatment.

When asked if she would fight Rousey, Cyborg simply responded -“For sure, I think this fight is what
everybody has waited for. I don’t know if it happens but if it ever does it will be a fight I know
the fans will be very happy and excited about.”
The dream fight would definitely turn out good for business, but Rousey is way out of fighting form
currently. And to fight a war machine like Cyborg, she has to get some fights under her belt to boost her
confidence.

Previous articleStipe Miocic vs. Francis Ngannou: Who Will be The Last Man Standing?
Next articleUFC 220 Embedded: Vlog Series – Episode 6