Cris Cyborg parted ways with UFC last week after coming off of a unanimous decision victory over Felicia Spencer at UFC 240 which took place in Edmonton, Canada last month.

Although many fans wanted to see her fight current featherweight and bantamweight champion, Amanda Nunes, next, it’s highly unlikely that fans will be able to see the rematch anytime soon. 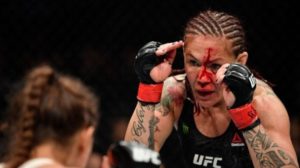 However, Cyborg’s coach Jason Parillo says that he only wants to see her fight Amanda Nunes next.

In the meantime, Cyborg has become MMA’s hottest free agent and till now Scott Coker of Bellator has already offered her a deal.