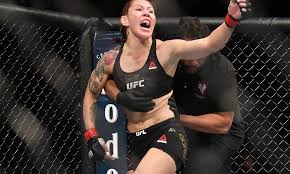 UFC Featherweight Champion Cris Cyborg is not playing around with her training with a super fight against UFC Bantamweight Champion Amanda Nunes coming up at UFC 232 in Las Vegas, Nevada on the 29th of December.

New footage has emerged of Cyborg’s hardcore training that clearly show how seriously she is preparing for her title defense against Nunes. Cris Cyborg is seen to be hitting a heavy bag while a training partner is hitting her with hard body shots to the solar plexus. A former Chute Boxe fighter, Cyborg is no stranger to hardcore training and this type of training serves to improve her conditioning which the legendary Chute Boxe gym was famous for with alumni like Wanderlei Silva, Shogun Rua and Anderson Silva.

The much anticipated super fight between the UFC featherweight champion and the bantamweight champion came after many reports that Cris Cyborg was dissatisfied with the UFC and president Dana White for not getting the respect she deserves.  Cyborg had her last fight at UFC 222 against Yana Kunitskaya and was allegedly asking the UFC to fight Nunes in September.

Amanda Nunes’s last fight was in May at UFC 224 where she finished former teammate Raquel Pennington by Technical Knockout in the fifth round to defend her title for the third time.

Previous articleTatiana + Khabib = Thabib
Next article“He got beat pillar to post in his last fight!” – Aljo unloads on Dominick Cruz!