UFC featherweight Cub Swanson is all set to fight BJJ legend, Kron Gracie at UFC Fight Night 161 which is taking place at the Amalie Center in Tampa, Florida on October 13.

Ahead of the fight, Cub Swanson is going through frustrating times as he couldn’t find a place to train Jiu-Jitsu. Numerous BJJ schools have declined to train Swanson as he is fighting a Gracie. 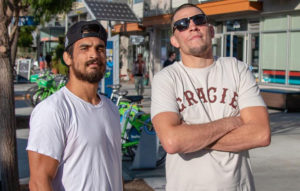 Gracie is synonymous with Jiu-Jitsu around the world. The Gracie family is credited with the development of Brazilian jiu-jitsu (BJJ).

“I’ve been able to get a lot of jiu-jitsu in because he’s a Gracie, and he has the name. It’s been an interesting one,” Swanson said on UFC Unfiltered podcast. “I’ve been kicked out of a couple of jiu-jitsu schools because of the respect. They don’t want to train somebody that isn’t a Gracie, which really pisses me off.”

Cub Swanson isn’t going through good times in the Octagon either. He is currently riding on a four-fight winning streak having lost to the likes of Brian Ortega, Frankie Edgar, Renato Carneiro and Shane Burgos.

“I feel like I’m the best fighter I’ve ever been,” Cub Swanson said. “It’s unfortunate that I’ve had some losses, and I haven’t been able to show that. But this is another chance to make a statement and against a Gracie. I think it’s an honour for me.”

“Fights like this I need to be technical,” Swanson said. “I think I need to not show him any respect when it comes to getting comfortable and just start punching him in the face. I also am a black belt. I’ve gotten criticized for my jiu-jitsu before, but I wasn’t able to always roll with the best of the best grapplers because I was focusing on my striking.”

Kron Gracie, on the other hand, made his UFC debut earlier this year against Alex Caceres and defeated him via rear-naked choke submission in the first round. He is also undefeated inside the Octagon so far. So, it is understandable as to why Jiu-Jitsu schools refusing to train Cub Swanson is frustrating for him.