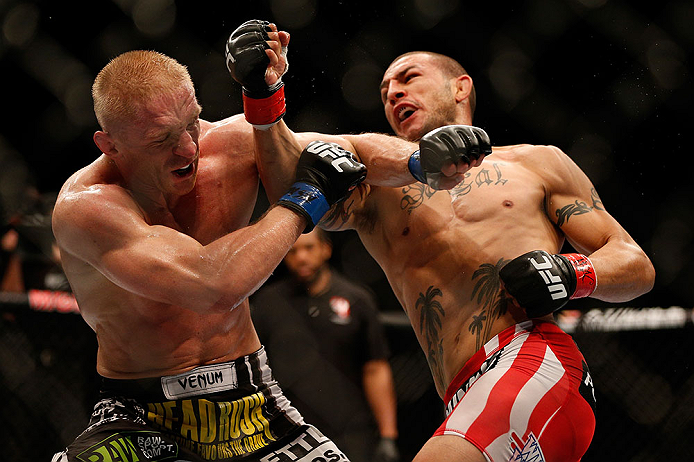 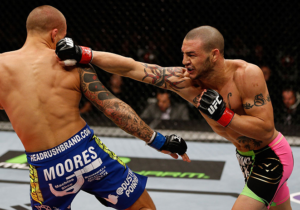 “Killer” Cub Swanson has come out and claimed that he is ready to face MMA superstar and UFC Lightweight contender, Nate Diaz in the main-event of UFC 222. UFC 222 recently lost it’s main-event bout between Max Holloway and Frankie Edgar. Holloway was expected to defend his Featherweight title, although he was forced to pull out of the fight due to a leg-injury.

Swanson was defeated in his last outing inside the octagon against Brian Ortega. His UFC contract ended with that defeat and he hasn’t signed a new contract yet. On the other hand, Nate Diaz last fought and lost at UFC 202 against Conor McGregor. There has been some hearsay that Diaz is eager to headline UFC 222. However, there is still no official confirmation by the UFC about Diaz’s potential return. 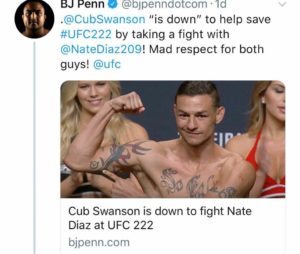 There has been a lot of talk regarding a potential opponent for Diaz at UFC 222. Hence, a fan asked, ‘Killer’ to fight the Stockton native and save the PPV. Swanson replied to the fan’s tweet saying that he is down to fighting the younger Diaz at the event.

The UFC are still to make any official comments about UFC 222’s new main-event. However, a potential headliner would between Swanson and Diaz would be a mouth-watering prospect for fans and pundits alike.