UFC Featherweight Cub Swanson ended his four-fight losing streak on Sunday when he defeated BJJ royalty Kron Gracie at the co-main event of UFC Fight Night 161, which took place at the Amalie Arena in Tampa, Florida.

This was a huge test for Cub Swanson who was not only fighting for his place in the UFC roster but also fighting a BJJ royalty, son of Rickson Gracie and grandson of Helio Gracie. Kron Gracie carried a lot of hype behind him and rightly so as he had earlier defeated Alex Caceres at UFC on ESPN 1 in his debut and was undefeated going into the fight. 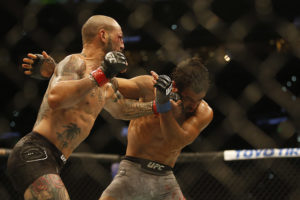 Cub Swanson fought beautifully and stuck to his gameplan which was of sticking and moving. Cub plummeted Kron with hard body shots and never really involved himself in a close encounter with Kron.

After the fight, Cub Swanson took a shot at Kron Gracie on twitter:

And the earth is round 🌎 #UFCTampa