Last weekend at UFC 242 in Abu Dhabi, Curtis Blaydes defeated Shamil Abdurakhimov via a second-round TKO. It was the only heavyweight fight in the entire card.

The fight was entertaining while it lasted as Curtis Blaydes started dominating the fight right from the beginning with his elite wrestling as he went for the takedowns early in the fight. Shamil was no match for Blaydes, who scored four takedowns in the first round. In the second round, Blaydes followed up with hard elbows which shattered the Russian’s face and ultimately with 2:22 seconds remaining on the clock, the referee stepped in to stop the fight. 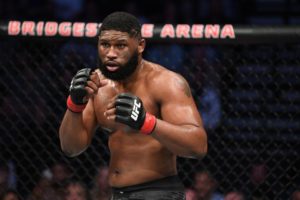 Blaydes was happy with his performance as according to him the fight had gone exactly the way he had predicted.

“The fight was exactly how we predicted it might happen: how to hold him, get him on the ground, takedowns, everything,” he said.

“I’m very, very strong. I’m a very good wrestler. I knew once I get behind your kneecaps, there’s not much you can do. I was getting in there pretty easily.”

He is now currently riding on a two-fight winning streak as he bounced back from the first-round knockout loss to Francis Ngannou at UFC Fight Night 141 last year. He also has a future opponent in mind for his next fight.

“I think the only guy that’s logical is Junior (Dos Santos). They’re not going to give me (Daniel Cormier) or (heavyweight champion) Stipe (Miocic) or Ngannou. Junior’s ranked right above me. It makes sense. … I think I’d do the same thing to him I’ve done to everyone else: I will take him down, and I will ground-and-pound him.” (H/T – MMAJunkie.com)

Who do you guys want to see Curtis Blaydes fight next?