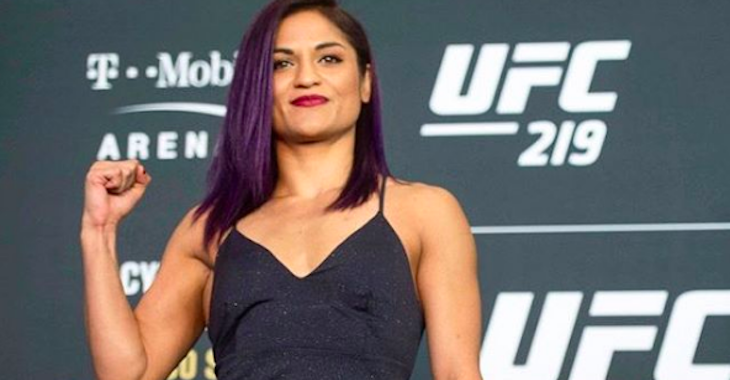 Cynthia recently served a nine-month suspension courtesy of the Nevada Athletic Commission (NAC) for her positive UFC 219 drug test for marijuana. She was cleared on 30th September 2018. Calvillo was also fined $6,150 — 15 percent of her $41,000 purse in her fight against Carla Esparza — and will be required to submit a clean drug test before seeking relicensure.

Calvillo tested positive for Carboxy-Tetrahydrocannabinol (THC) — a marijuana metabolite —in December of 2017 in an in-competition drug screening in relation to her UFC 219 fight against Carla Esparza. 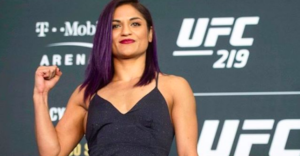 Cynthia Calvillo said that the Nevada State Athletic Commission, not the United States Anti-Doping Agency gave her the most headache in her whole situation.

“USADA was actually pretty good when it first happened…of course, you have to follow the rules…you know, whatever happened with the testing. They had actually originally given me six months with the ability to be able to reduce the time in three months, so I would have been ready to go…it was more of the Nevada State Athletic Commission (NSAC) that came in with more of a longer term. That really sucked, just because I know that the Nevada State Commission already had legalized it there and they use it for recreation. I know that there are a lot of…the head chairman of the Nevada State Commission makes a ton of money off of the cannabis business, it just really sucked that they ended up giving me nine months. Especially when, if giving other athletes, even after me, only six months for the same thing,”

Although Calvillo lost her last fight, prior to that she was on a three-fight winning streak against Amanda Cooper, Pearl Gonzalez, and Joanne Calderwood. Even though she has been off the Octagon for a long time she feels, she is ready for her next fight against Poliana Botelho next week.

“Honestly, anything can happen. I’m going to go in there and make the adjustments in there, but I’m definitely going to get the finish. Whatever comes…whatever she gives me, I’m open and I’m really excited about this fight. I’m just happy to get back in there, I think I’m going to be able to showcase a lot of good things and I’m just one set of plans that I feel like I did in the last fight. So I’m excited to just get in there and have fun again, I think if anybody ever notices…my first couple of fights, I’m coming out there and really smiling and I’m excited. This last one (at UFC 219), I came out with the meanest mean mug ever and the next thing I know is I’m going to get this girl’s head off. I’m just going to go out there and perform, I’ve been putting in a ton of work and I’m really confident and whatever happens in that cage…I’m going to be prepared for it”.

MMA India Exclusive with Asha Roka: I want to prove I’m truly the best flyweight on this planet