Double Champ Daniel Cormier announced retirement in March 2019, but came back from retirement for his trilogy fight against Stipe Miocic. The two fighters are ready to battle it out for the title of the greatest heavyweight of all time, at UFC 252 on 15th August at the UFC Apex. 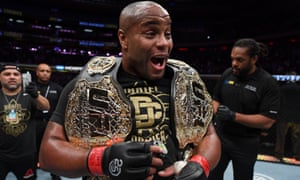 While fans and Daniel Cormier himself believe that this will be his last fight, Dana White does not buy it. He doesn’t believe this is DC’s last fight. The UFC and DC have had a very good relationship, and we have seen it grow beautifully over time. Both parties were on the same page regarding who DC will fight when, and that’s why it all worked out well for both.

Dana White believes that if DC wins the fight in great fashion, he will not retire knowing he still has so much left in him. And if he loses, DC would not want his last fight to be that way. “No, it’s not (Daniel Cormier’s last fight),” Dana said in an interview with MMA Junkie. “No, it’s not. It’s obviously going to depend on how the fight plays out on Saturday night. If Cormier wins in spectacular fashion, this will not be his last fight. And knowing him the way that I do, if he loses, then it will be, ‘I can’t go out like this.’

“You know me: When people start to talk about retiring, I think they should. Stipe, who people were saying is probably going to retire after this, too, but he squashed that tonight, I don’t think either one of them should retire. They’re two of the best in the world, and they still have a lot left in them. But we’ll see. We’ll see how the fight goes on Saturday.“, said White.

Daniel Cormier says he will retire after UFC 252

Despite the difference in opinion, DC knows what’s best for him, and confirms that UFC 252 will, in fact, be his last fight, win or lose.

“I’m a guy with a big ego, and that would suck,” Daniel Cormier said. “I’ve got to be honest. To think there would be two guys in my career that were just better than me, and I had multiple chances to beat them, and I didn’t get it done … Yeah, it would suck.”

The fight is obviously a very crucial one for both of them and is beyond just the belt. The fight is for the greatest heavyweight of all time. Who do you think takes the title?

Previous articleFriday Fighter of the Week : Ritu Phogat
Next articleUFC News: Daniel Cormier says retiring on top will put him in the same league as Michael Jordan, Manning Peyton