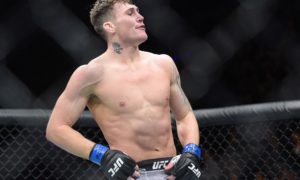 Many believed that the 26-year old Liverpudlian would be the guy to represent British MMA at the top level, but now UFC president Dana White admitted that the promotion may have pushed Till a little bit too early.

“I think Till went back to the drawing board,” White said in an interview with ESPN. “He’s a young guy. After the win over (Donald Cerrone), we may have pushed him too soon. It happens sometimes when a guy gets that much steam behind him. Pump the breaks a little here. Let him get back and work on the things he needs to work on. He’s going to be around.”

“You come in and beat a guy like ‘Cowboy,’ and boom, you immediately get bounced right up into the middle of the rankings,” White said. “(For) some people it’s the perfect time and (for) some people (it’s) a little soon. That weight division is nasty. It’s like murderers row in that top eight.”

White also said that it’s unclear as to when Till will be back into the Octagon.

“We’ll give him some time, look for a next opponent, and see what’s next for him,” White said.