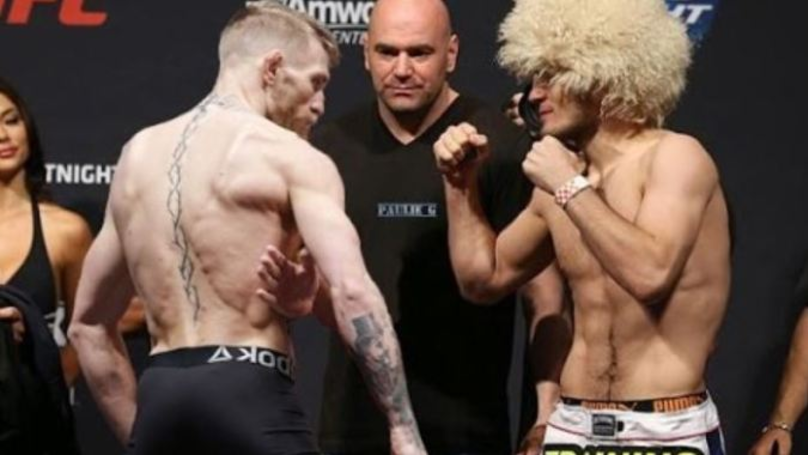 The feud between Conor McGregor and Khabib Nurmagomedov has reached all new levels on Twitter. The two fighters have been throwing shade at each other, with each tweet being more below the belt than the last. UFC President Dana White has had enough and has called them out on the matter now.

Conor McGregor posted a photo of Khabib with his bride on Twitter, calling his bride a ‘towel’. The tweet was called anti-Islamic by Ali Abdelaziz and said that Conor had ‘insulted 1.5 billion Muslims’.

The Khabib took to Twitter with a below the belt tweet, posting a tweet of McGregor with a woman other than his girlfriend Dee Devlin. In the tweet, he called McGregor a ‘rapist’ bringing up his sexual assault allegations, and said that ‘Justice’ would find him.

Dana White issued a statement to Yahoo Sports, where he called out both fighters for the ‘unacceptable’ exchange.

“I’m aware of the recent social media exchange between Khabib Nurmagomedov and Conor McGregor. The ongoing situation has escalated to a level that is unacceptable. As such, we are taking the necessary steps to reach out to both athlete camps and this situation is being addressed by all parties internally.”

White did not talk about any specific action, but hopefully, he will bring a measure of control to what has become hate-fuelled tweets.

Confirmed with UFC that they did in fact reach out to Conor McGregor and Khabib Nurmagomedov’s camps to address the last 24 hours and the escalation of the tweets. First reported by @KevinI.