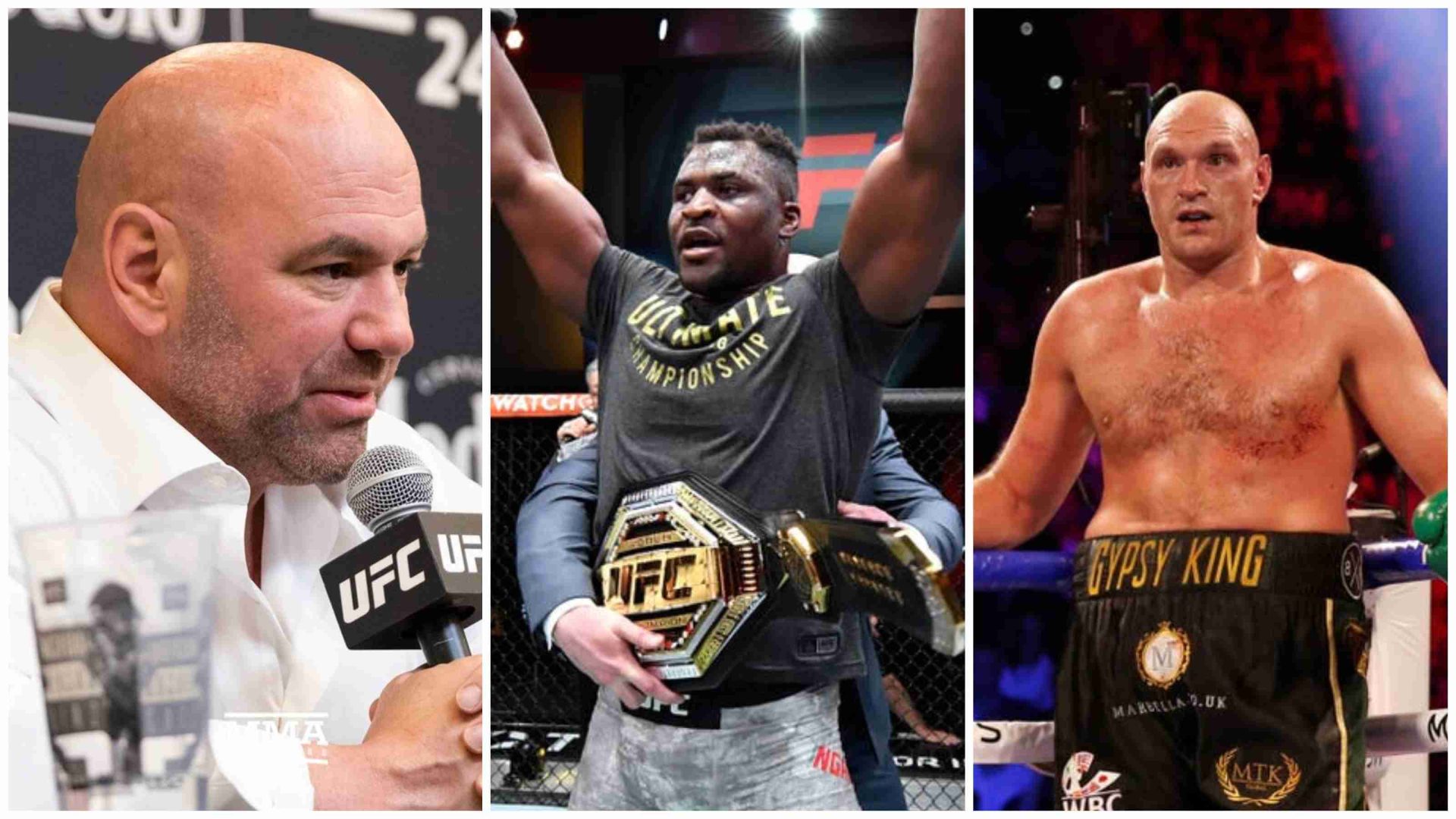 UFC heavyweight champion Francis Ngannou and WBC heavyweight champion Tyson Fury, two of the biggest names in combat sports today, are speculated to be facing each other in a boxing match in the near future and the UFC president Dana White has his say in it. Both Ngannou and Fury have shown a willingness to spar one another. And with Ngannou having just one fight left on his current UFC contract which the MMA fighter is not willing to renew without a pay rise, there are chances that the French-Cameroonian may never be seen inside the Octagon again which would make him free to box Fury. Amidst all these, Dana White opened up on the Ngannou vs Fury topic, saying that it has not surprised him.

Francis Ngannou and Tyson Fury have been going at one another regarding a potential boxing match in the future. Both heavyweight champions have shown willingness to fight one another and things recently heated up between them elites after Fury recently challenged Ngannou to a boxing match donning MMA gloves instead of the sparring ones.

“Who would like to see me fight this beast boxing rules @ufc gloves? @danawhite @francis_ngannou,” Fury tweeted earlier this month.

In his response, Ngannou said that he would opt for a fight in the cage, but with boxing gloves.

“How about MMA rules with boxing gloves? I can do you that favor” Ngannou replied.

Meanwhile, Dana White has seen this entire situation from a different perspective. According to the UFC president, its boxers like Fury who need fighters from the MMA fraternity for a matchup and further added that it has not come off as a surprise for him.

“Listen man, these guys… None of this surprise me,” White said after UFC Vegas 46, “It’s like these boxing guys need guys to fight. That’s what it shows. You know what I mean? And yeah, no, it doesn’t surprise me at all.” [H.T. BJPenn.com]

Aside from the UFC being involved in multiple accusations regarding low pay for the fighters, the situation regarding Francis Ngannou is the first of its kind in the promotion. Ever since Ngannou signed an eight-fight deal back in 2017, he and the company both have failed to come to terms several times in the past regarding a contract renewal.

Ngannou has only one fight remaining in his current contract with the promotion- the upcoming UFC 270 showdown against interim champion Ciryl Gane this weekend and has warned to not fight anymore as he believes that he is very underpaid.

“No,” Ngannou recently spoke to ESPN about his future with the UFC “I will not fight for $500,000 [or] $600,000 anymore. It’s over. I took this fight for personal reasons, because I want to make sure that regardless of [whether] it’s fair, I can make my case that I have completed the fights.”

Dana White himself spoke his mind regarding the Ngannou situation last month, hinting that if both sides aren’t able to come to terms then he would not hesitate to part ways with the French Cameroonian fighter.

Do you agree with Dana White? Let us know in the comments.